This is not strictly an RCMP issue or even a BC issue. It’s a problem materializing across North America as police forces across the continent become increasingly militarized and place the focus, not on how to deal with people, but on how to crush them under the weight of overwhelming force.

Robert Dziekanski died as a result of that mentality, although you will never hear that from the four men who murdered him, or from the RCMP itself.

As horrifying as the BC deaths of Ian Bush, Robert Dziekanski and Orion Hutchinson are, police in Lee County, Florida, have managed to take that horror and ratchet it up a notch or three. 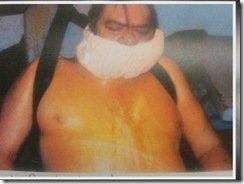 This photo is of Nick Christie, 62 years old when he died at the hands of police inside the Lee County Jail.

The white cloth covering his face is a spit mask.  He was stripped naked and kept that way for over 48 hours, chained to a chair.

This photo was actually taken about an hour before Nick Christie died as a result of the heinous treatment, torture really, he suffered at the hands of the very people who should have been protecting him.

There was an investigation into Christie’s death, of course.  It was, to be kind, a complete joke.

It was the The District 21 Medical Examiner who investigated the death in Lee County, and as a result Nick Christie’s death was ruled a homicide.

You’d think that a ruling of homicide, the intentional “killing of one human being by another” according to Webster’s dictionary, would result in somebody being held accountable for killing Mr. Christie, right?

Yeah, you read that right.  Nobody was responsible for a man dying in police custody, despite their stripping him naked, tying him to a chair, gagging him and then repeatedly dousing him in pepper spray.

It was just another day at the office, apparently. God help the good folks of Lee County if they run into any of their County Sheriffs!

Joyce Christie, the wife of the man killed by police, has filed a wrongful death lawsuit.  In her lawsuit she alleges her husband was pepper-sprayed at least 10 times in a 48-hour period.

“I was shocked. This was something out of a horror movie,” says Joyce Christie.

Members of the Lee County Sheriff’s Department even tried to stop the horrific treatment, but were told to shut up and mind their own business.

Deputy Trainee Monshay Gibbs was in the jail at the time this happened.   In her videotaped deposition she explained that the treatment was excessive, in her opinion.

I’d go so far to say “in the opinion of any rational and humane human being”, but then I’m just that way… I don’t think the goons who killed Nick Christie were anything close to either rational or humane.  He was in custody and restrained for 48 hours before he died, which means there were multiple shifts of people dealing with him.  There are a LOT of people responsible for his death.

“He had a spit mask on and was naked,” she said on the video while under oath. Deputy Trainee Monshay Gibbs testified that Christie pleaded with guards to take off the spit mask because he couldn’t breathe.

Clearly something is very, very wrong in the Lee County Sheriff’s Department.  Dare I say it… they actually make the RCMP look okay.  They at least had the decency to kill Robert Dziekanski quickly.  They didn’t spread out the torture for two full days!

Nick Christie was eventually taken to the hospital.  His heart failed as a result of the repeated pepper-spraying, compounded by being chained and gagged for so long.

As one commenter on the Tampa Bay Fox story said,

This is ridiculous. The sheriffs office can’t even release a simple statement. No apology? No sorry for your loss? They took a man’s life. Innocent or not that’s plain wrong.

Right and Wrong have lost all meaning.

So how come it’s only you and me that are held accountable for our actions?  Police are not held to the same standards they supposedly hold us to, and that’s just plain wrong.

Joyce Christie, on behalf of the gutless cowards who murdered your husband and don’t even have the decency to say “sorry”, let me say it for them…

“I am very sorry for your loss.”

I also hope your lawsuit wipes the smirk off these people’s faces, and forces some level of accountability down their throats.