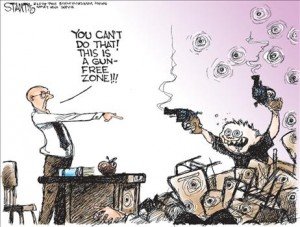 A case coming out of Noelville, Ontario, is once again proving the utter uselessness of Canada’s entire “gun control” system.

On March 18, 2011 Maurice Corriveau was arrested and charged with three counts of unauthorized possession of a firearm after police searched his home.  By his own admittance he had tried to apply for a firearms license but when his application was returned to him for more information he just let it drop.

That in and of itself is no big deal, and  I’m sure this happens all the time.  People, frustrated with the bureaucratic red tape involved with legally owning firearms in Canada, simply give up on the system.

Unfortunately for the likes of Windy Wendy Cukier and Lying Heidi Rathjen, Maurice Corriveau unintentionally went on to become the poster-boy for everything that is useless about Canada’s firearms laws.

You see, despite the news reports spouting off to the contrary, everything Maurice Corriveau did only proves that the system does not work, and that mere possession of a firearm does not make one a danger to society.

For example, the Sudbury Star article starts off like this:

A Noelville man learned a $6,000 lesson about the importance of being a properly licenced owner of firearms.

That’s a nice lead-in line, but it leaves out the most important aspects of this case, namely that a man without a firearms license was able to purchase a handgun, a rifle and a shotgun, all without any government-mandated paperwork.

Handguns are, as most are aware, restricted firearms.  What this means is that in order to own a handgun legally, you must have both a firearms license for yourself and a registration certificate for the handgun.

Maurice Corriveau had neither, yet was able to easily purchase a handgun anyway.  Illegally. Doesn’t say much for the system that has demanded handguns be registered for over 77 years, does it?

It also doesn’t say much for the licensing system that’s touted as being able to prevent this precise thing from happening.

There is no way Mr. Corriveau could be in legal possession of his handgun, but let’s put that aside for a moment.

In order for Mr. Corriveau to possibly have been in legal possession of his long guns, assuming he owned them prior to the 1995 Firearms Act coming in to force, he would have had to have been 16 years old when the old Firearms Acquisition Certificate system became mandatory in 1979.  His current age of 47 means he was born in 1964, making that impossible.

What is fascinating about this case is that nobody, and I mean nobody is talking about, is the fact that this man was able to acquire a handgun, a rifle and a shotgun without jumping through the legal and bureaucratic hoops to do so.

Because this case shows with stark clarity how a man who is absolutely no danger to society can own firearms, albeit in violation of the law.

Yes, I said “a man who is absolutely no danger to society.”

How can I possibly know this?

Does someone who is a danger to society take the time and effort to remove the cylinder from his handgun, remove the bolts from his rifles and lock them up?

No, they do not, yet that is precisely what Maurice Corriveau did, according to the Sudbury Star article.

The revolver could not be fired because its cylinders had been removed.

Now, while I personally can’t know for certain that Maurice Corriveau is no danger to society, despite his actions above, I must presume that Crown Counsel believes it to be true.

If they believed he is a threat to society, Crown Counsel would never have submitted a sentencing recommendation of a fine and probation, which is precisely what they did.

Montague was sentenced to 18 months in prison even though, just like Maurice Corriveau, Montague was not then and is not now any threat to society.

The Maurice Corriveau case shines the light of truth on “The Big Lie” that what keeps Canadians safe from gun violence is firearm licenses and gun registration slips.

What keeps Canadians safe from gun violence are men precisely like Maurice Corriveau (and Bruce Montague), who have absolutely no intent to harm another human being with their firearms, regardless of whether or not they have the “proper paperwork” to go with those firearms.

Just like Bruce Montague before him, Maurice Corriveau had no prior criminal record.

The real danger to Canadians are the people who DO have the intent to harm other human beings, regardless of whether they have firearms or not.

They are the ones shooting up downtown Toronto, Winnipeg, Edmonton and Vancouver, not men like Maurice Corriveau and Bruce Montague.

There is a reason why the likes of Windy Wendy Cukier and Lying Heidi Rathjen are utterly and completely silent about the Maurice Corriveau case.

They’re hoping that Canadians will blindly continue to buy into the lie that they keep floating… and while they’re doing that, they’re also praying that nobody will ask the questions,

“How come this man was able to buy a handgun, a shotgun and a rifle without a license?”

“If he’s so dangerous, how come he disabled his firearms and locked up their bolts and cylinders so they could not be fired?”

Windy Wendy Cukier and Lying Heidi Rathjen have no answer for either of those questions, do they?