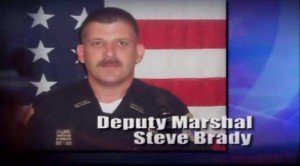 Waterloo, Indiana Deputy Marshal Stephen Brady, 47, is a very lucky man this Christmas.  For doing what police officers do on a rainy and miserable night, helping broken-down motorists, Deputy Marshal Brady was shot in the face and left for dead.

Responding to a call from a home where a man and a woman had supposedly gone for help, claiming their car was in the ditch, Marshal Brady was shot in the face when he arrived.  The reason for shooting the Deputy Marshal are, so far, unknown.

What is known, of course, is that the shooting of Marshal Brady sparked a massive manhunt by Indiana police in an effort to find the couple, a manhunt that ended just 3 hours after it began.

As usually happens in cases like this, the massive search uncovered the perpetrators of the crime, who  stupidly decided to shoot it out with more than a dozen police officers.

12-2 aren’t particularly good odds, especially when the cops are extremely, shall we say, “displeased” with you, so it’s hardly a shock to learn that the male suspect was killed at the scene, and his partner, an as-yet unidentified woman, is in critical condition in hospital.

As is my standard response in these sorts of cases, I’m certainly not losing any sleep over the untimely death of 41-year-old Ralph Daniel Hardiek, the man who allegedly shot Marshal Brady in the face.

Wasting money to imprison someone who so callously disregards the life of the man who was only coming to his aid seems utterly pointless to me, as does the money wasted on a trial that precedes that incarceration.

Hardiek was no angel as his long criminal record confirms.

Hardiek has a criminal record in Utah dating to at least 1989, Department of Corrections spokesman Steve Gehrke said. Hardiek served 11 years for possession of a dangerous weapon by a restricted person and was paroled in 2001, but he returned to prison on a charge of mayhem from 2001 until 2004.

Gehrke said Hardiek was in and out of prison from 2004 until 2008, including a charge of walking away from a halfway house, until his release on Dec. 2, 2008.

His accomplice, identified as Julie Marie King, is listed in critical condition, although police are refusing to say which hospital she is at in the Fort Wayne area.

“Everybody knows the police and we’re all very devastated,” said Renata Ford, the town’s clerk and treasurer.

“People are outraged, devastated — with such a small town to have something like that happen to our police.”

As for what caused this unnecessary shooting of a police officer?

“It’s unknown what the dynamic was between the three of them that led to him being shot in the face,” Indiana State Police Sgt. Ron Galaviz said.

“Until we have an opportunity to speak with the woman and Deputy Marshal Brady, we really don’t know. Anything is possible.”

Miraculously Deputy Marshal Stephen Brady survived the shooting and is recovering in Parkview Hospital in Fort Wayne, much to the relief of his wife and co-workers.  His condition is still listed as “serious”, so he’s not quite out of the woods yet.

If you’re so inclined, please join me in praying for the swift and complete recovery of Deputy Marshal Stephen Brady.  While this certainly will not be his ideal Christmas, he is very grateful to be alive to see Christmas this year, something he probably was in doubt of as he lay shot and bleeding in the street.

If you live in the Waterloo, Indiana area, please do what you can to help Janet Brady get through this Christmas, one that will forever be marked on their hearts as both the most horrible and the best Christmas they have ever had.

Horrible because a husband was almost murdered… and the best because husband and wife are both alive to celebrate Christmas together, albeit from a hospital bed.

Lastly, I would ask that you again join me in praying for the swift and total recovery of Deputy Marshal Stephen Brady, and for the comfort through this incredibly trying time, both physical and spiritual, for his wife Janet.