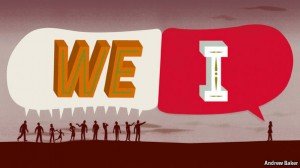 I am in the middle of an email conversation with a colleague who professes to believe in the Individual Rights and Freedoms of all Canadians.  I say “professes”, because this individual seems unable to grasp the concept of Individual Rights at all.

This individual asked a small group of us whether or not we each individually believed in the Supremacy of God.  Now before any atheists or the God-hating among us runs away, I would urge you to read the rest of this article.  You just might be surprised.

Every human being is born with the freedom to believe what they choose about the Supremacy of God, or even if there is a God in the first place.

Believing what we want about God is our Individual Right.

Whether I like it or not, and whether I agree with them or not.

We, as individuals, are certainly under no obligation to answer any demands others may have about what we do or do not believe.

To insist that I or anyone else is obligated to answer a question simply because someone asked it is, in my opinion, insane.

Take, for example, the Canadian Charter of Rights and Freedoms.  While hardly the most profound document ever written, it does make a few things clear.

Section 2 of the Canadian Charter of Rights and Freedoms:

2. Everyone has the following fundamental freedoms:
(a) freedom of conscience and religion Section 2.(a) is very clear, even by Charter standards, at least to me.

That spells out quite clearly that I have freedom of religion.  That means, at least by the Webster’s Dictionary definition of “freedom”, to mean “the absence of necessity, coercion, or constraint in choice or action.”

What neither the dictionary definition of freedom nor the Charter Right spells out is the fact that the individual is free not only to make whatever decision they want about God or religion as they see fit, but more importantly they are under absolutely NO OBLIGATION to explain, justify or rationalize their belief in God or lack thereof to ANYONE.

And this is precisely where the sticking point came for me with this individual.

Here is part of the message that prompted both my response and this article:

I simply asked for people’s opinion as to where they stand on this?  What is so darn difficult in answering this question?  I can tell you this much.  This is a BIG RED FLAG for me!!!

As I wrote to the individual:

Do you fundamentally not grasp the concept of INDIVIDUAL rights???

What any individual believes about God or whether or not they even believe in God is NONE OF YOUR BUSINESS, despite your obvious belief to the contrary.

If that raises a “BIG RED FLAG” for you, so be it.

It is MY individual right to believe anything I want, WITHOUT having to answer to YOU or anyone else for it, period.

You are welcome to ask any question of me that you want. However, just because you ask a question of me does not in ANY WAY obligate me to answer it.  You may think it does, but that doesn’t make it so.

This hasn’t got a thing to do, at least on my part, with “fear of offending someone.” I offend people EVERY SINGLE DAY with the writings on my blog, and I’ve got the comments from those I have offended to prove it.

The plain truth of the matter, [name deleted], and a truth I think you are not going to like, is that MY answer to YOUR question is none of your darned business.

You see, the reality of all this is really quite simple.

I cannot have the “freedom to believe” if I must justify myself and my beliefs to someone else.

Is that really so hard to comprehend?

I often find that being as direct as I tend to be and stating these obvious principles in clear language often offends people like the individual I was corresponding with.

I suppose one of my many faults is that I don’t much care about offending people who cannot comprehend my fundamental, God-given Rights and Freedoms, let alone respect them.

It’s not that this individual and I differ in our beliefs… for I don’t believe we do.

Where we differ greatly, however, is in comprehending what an Individual Right really is, and why I did not need to answer the question no matter how much the questioner demanded that I do.

The unfortunate thing is that the lesson about Individual Rights that I was attempting to teach by refusing to answer the question “Do you believe in the Supremacy of God” was not learned, the other party preferring to descend into a name-calling rant.

It is that mindset (of disrespecting our Individual Rights and Freedoms) that sent millions of people to their deaths in Soviet Russia in the 20th century, not to mention the many other nations around the world that routinely killed its own citizens for having the audacity NOT to believe as the State says they must.

That is the precise mindset that is currently murdering Christians across the Middle East this very week.

While Canada is yet some distance from this type of disaster, the reality is that this is precisely where the abdication of our Individual Rights and Freedoms ultimately leads… to the State-sanctioned murder of those who don’t believe what the State demands they believe.