While Jane and I can sometimes get into debates over various issues and individuals, for the most part we see the world quite similarly… I suppose that’s why I call her my “unindicted co-conspirator” when it comes to writing.

A lot of what gets written about here on ChristopherDiArmani.com comes out of those discussions and debates between Jane and me.

So when I said about a month ago or so that my pick for the next President of the United States was Herman Cain, after “explaining” to me how Cain supports the Federal Reserve system and therefore can’t be trusted, about the only thing Jane asked me was something to the effect of “What the heck is wrong with Ron Paul?” 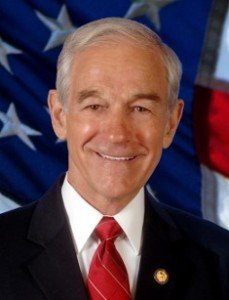 My answer would have to be that there is nothing wrong with Ron Paul.

There isn’t a politician in North America that grasps the concept of Freedom like he does. I simply felt that it was time for a non-politician to be at the helm and Herman Cain is vert smart, successful and knows how to turn bankrupt companies around and make them profitable again.

Equally as important, he’s black. Running against Obama removes the race card that Obama played so well last time around, and will play again this time around.

For the record, I don’t despise Obama because he’s black. I despise him because Obama is a socialist moron who is destroying America. I’d say the same thing about him if he’s green, blue or pink with green polka dots!

America is a bankrupt nation, both financially and morally, and is desperately in need of some turning around. By that I don’t mean handing more billion-dollar-bailouts to the bankers on Wall Street that caused all the problems in the first place. Calling that sort of thing “asinine” is being far too polite, in my opinion.

Every single one of the folks at the financial institutions that got bailed out with taxpayer cash after they screwed everything up should be in prison, AND they should be forced to give back all the money they bilked taxpayers for.

That being said, now that Herman Cain has withdrawn from the race I find myself wondering who can actually get elected in a race with the current Pretender-In-Chief, Barack Obama.

If the mainstream media can get over themselves long enough to actually start mentioning Ron Paul’s name in newscasts, I think he stands a good chance of being that man.

Unfortunately, because he talks so clearly about what’s wrong and what needs to be done to solve the problems, the mainstream media twists itself into some pretty amazing contortions in order to PREVENT themselves from actually saying his name.

Ron Paul is the Republican Party’s “Invisible Candidate”, as I wrote about back in August.

The most classic example of this was the August 9th newscast that talked about Mitt Romney leading the race, Rick Perry in second, and Michele Bachmann dropping down to fourth place. Here is what the commentator said:

And here is the graphic they showed on screen while the statement above was being read: 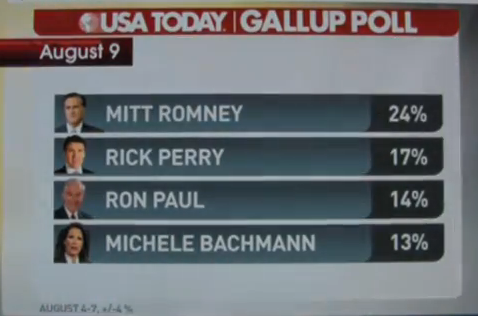 Even though the graphic on the television screen clearly had Ron Paul’s name in the 3rd slot, the announcer just couldn’t bring himself to actually say that Ron Paul was the guy who was ahead of Michele Bachmann.

If you want a crystal-clear example of the clarity with which Ron Paul speaks, watch the video below. It’s a series of Ron Paul clips compiled from the recent Iowa Debates that aired on ABC.

Ron Paul makes complete and total sense, which is why he is probably unelectable in today’s America. We seem to prefer leaders who have charisma and can speak well, at least so long as there is a teleprompter or two on stage.