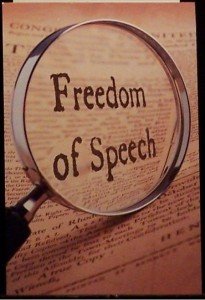 Freedom of Speech vs “Approved Speech”.  This is at the heart of the ongoing push to remove Section 13 from the Canadian Human Rights Act.

That is what is called a “watershed moment”.  Everything relating to our Right to Freedom of Speech changed with that ruling, and changed for the better.

For over 30 years Canadians had suffered under a censorship law that put men in prison for daring to say something that another individual found offensive.

Despite the actual Human Rights Act saying otherwise, there is no inherent “human right” NOT to be offended.  There is no such thing.  That is a manufactured right used to bludgeon those the State does not agree with into submission, and nothing more.

Governments pass laws all the time.  Just because Man has written up some gibberish and given it a nice, glossy finish by proclaiming it in Parliament, that doesn’t mean it’s correct.

It’s wrong to murder human beings, Jewish or otherwise, but in Germany in 1939 it was perfectly legal.

Legal and correct are two vastly different concepts, a point which anyone willing to actually think rationally about it will concede.

We don’t need endless bureaucracies filled with bureaucrats to tell us which ideas are “good” and which ideas are “bad”.  Human beings are perfectly capable of figuring these things out all on our own, without government intervention.

We certainly don’t need buildings full of bureaucrats to tell us what we are allowed to say and what we are not, again, contrary to what the building filled with Human Rights Commission bureaucrats would have you believe.

They believe the world cannot function without their brilliance being place upon us in the form of diktats and threats of jail time and/or fines.

In every single case I’ve researched on Freedom of Speech in Canada, not one of the cases charged a person who put forward a “high-profile” idea, you know, an idea that the majority agrees with already.

In every single case the idea that was deemed “hateful” and therefore “not approved” was a fringe idea that had little or no merit by conventional standards.

The irony of every single one of these cases is this:

The very ideas that Human Rights Commission bureaucrats were so terrified people might actually hear of… these so-called “hateful ideas”… they gained far more exposure and notoriety because of the actions of these bureaucrats than they ever could have if the individuals promoting them had simply been left alone to be judged in the Marketplace of Ideas.

Ernst Zundel, for example, promoted the idea that the Holocaust was a hoax. Left to himself and his own devices, the vast majority of the world would never even have known his name.

In the Marketplace of Ideas he had already been dismissed by the vast majority of people who had actually heard of him.  It was only because of the endless persecution of Ernst Zundel by Human Rights Commission bureaucrats that he became a household name.

Discrimination is a Good Thing

As much as politicians and so-called hate speech activists want to say that discrimination equals evil, the hypocrisy of that very statement seems lost on them.  By their very actions they are demanding that their brand of discrimination be foisted on you and me, because theirs is the only “correct” view.

What utter hogwash, to be polite.

Human beings the world over discriminate every single hour of every single day about more things than you can possibly count.

Does it make me a criminal because I believe something that you do not?

Does it make me a criminal because I choose not to associate with you because of the beliefs you hold?  Beliefs I happen to disagree with?

Only in the eyes of Human Rights Commission bureaucrats and anti-Freedom activists.

The rest of us are fully capable of comprehending that discriminating between two or more ideas or people is something we do every hour of every day.

Does refusing to get into a cab with an East Indian driver mean I hate all East Indians?

No, of course not. Don’t be ridiculous.

I just don’t like the smell of curry and would rather get into the cab driven by the First Nations driver, the Chinese driver or even (gasp!) the white driver?