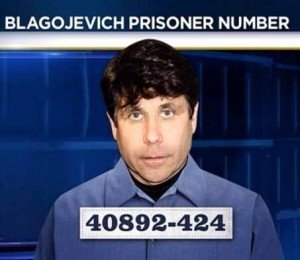 Rod Blagojevich, the former Illinois Governor who tried selling off Obama’s senate seat among many other things, was found guilty on 18 counts of corruption and sentenced to 14 years in federal prison.

He’d claimed he was innocent for years, but upon being found guilty in a court of law, he’s suddenly all apologetic and contrite?

“I’m not blaming anyone. I was the governor, and I should have known better. I am just so incredibly sorry.”

I, for one, am not very convinced.

The epitome of the “entitled class”, Blagojevich felt it was his God-given right to do as he pleased at the expense of his own integrity and dignity, not to mention the citizens of Illinois.

The guy lied for over 3 years about what he had done, and like all good chameleons, is only truly sorry that he got caught.  He doesn’t really believe he did anything wrong, his current protestations to the contrary.

It’s awesome to see this hypocrite being sent off to prison for 14 years, and it would have been a better lesson to those that decide to run for public office if he had been sentenced to the maximum of life in prison.

That being said, it is a glorious sight to behold…a corrupt politician actually being held accountable for his criminal actions.

The judge in the case, Judge James B. Zagel, hit the nail on the head when he stated,

“The harm is the erosion of public trust in government.”

So true.  We have so little trust in politicians at the best of times…. when someone like Blagojevich crassly tries to sell a senate seat it trashes any remaining faith we might have in our political system.

The only thing I disagree with in the way this case is wrapping up is that the convicted felon is being allowed to stay out of prison for the Christmas Holidays.

For reasons that only the entitled class can explain (and mere regular folk like me cannot comprehend) Blagojevich does not have to report to prison until next February 16th.

Any regular criminal would have been immediately hauled off to begin serving his sentence… so obviously some of his entitled class status still remains.

Blagojevich is just the latest in a long line of corrupt Illinois politicians to be sent off to the big house.  Illinois seems to have a penchant for corrupt governors, congressmen and aldermen.

I guess it must be something in the water.

And speaking of something in the water… if you can believe it, there are people still defending Blagojevich and saying he should not be spending the next 14 years in prison, but should instead “pay a fine” and be placed “under house arrest.”

i think this sentence is way to harsh. at 55 this could mean he will spend the rest of his life in jail. prisons should be reserved for violent offenders. the state of illinois could benefit more from huge fines or lengthy community service. not just blago but all non violent criminals should be paying fines while on house arrest. no one that is not a threat should be locked in a cage. the US has more people in jail than any other country in the world.

Fear of prison sentences like this is the only thing that will keep the next Illinois governor from acting the same way the last two have!

A fine?  As “Josh” wrote in the comments to this story,

A fine would be considered just the cost of doing business. Taking away freedom is the only punishment that these guys get.

This man violated the public trust with reckless abandon and purely for personal gain. The only possible penalty that will get through his self-indulgent skin is losing his personal freedom and living a good long time in a 6 x 10 concrete cell.

Who knows, it might even teach the guy some humility.

Hopefully in November 2012 Americans will get it right this time, and correct the terrible mistake they made in 2008, and keep blatant corruption out of their highest office in the land..