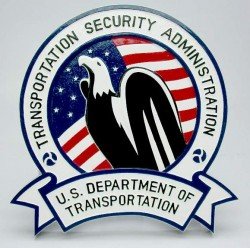 The US Transportation and Safety Administration (TSA) is hardly the most intelligent bunch in the world.  The TSA is made up of thugs empowered by the Patriot Act to use, abuse, sexually molest and otherwise harass travelers who are silly enough or desperate enough to want to fly.

I’ve written before on some of the more asinine things the TSA has done, including the forced sexual molestation of a child while the horrified parents look on.

The latest in TSA stupidity involves a pregnant 17-year-old, Vanessa Gibbs, who was attempting to travel home to see her mother in Jacksonville, Florida.

Her “crime” according to the TSA?

Her purse had the image of an old revolver on the outside of it.

Not a real revolver, just a 3-inch piece of plastic in the shape of one that is part of the decoration of her purse.

To everyone on the planet except the TSA screeners, it’s not a gun.  It’s plastic on a purse.

That’s the thing I despise most about bureaucratic thugs like those employed by the TSA and other government agencies, both in the United States and elsewhere.  They all operate by the same stupid notion that

The Rules are More Important than People

Common sense, as the saying goes, just isn’t that common, especially among bureaucrats like the “fine upstanding folks” who detained Vanessa Gibbs.

Naturally, on her flight TO Virginia the TSA goon squad didn’t see a thing wrong with her purse.  It was only when she attempted to board her return flight home that the bureaucritters descended upon her and forced her to miss her flight.

Now bureaucritters like that always fall back on that great Nazi defense that failed so miserably at Nuremberg after the war… “I was just following orders!”

The TSA claimed the design on Vanessa’s purse could be considered a “replica weapon,” which the TSA bureaucritters banned back in 2002.

Oddly enough, the only people that apparently confuse the 3-inch design on Vanessa’s cute little purse with a real firearm are TSA agents.

The rest of the world seems quite capable of making the distinction.

So remember good travelers, if you absolutely MUST fly in order to get to your destination, then always remember the Bureaucritter’s Golden Rule:

The Rules are More Important than People

Remember that simple bureaucratic and everything that happens to you along the way, no matter how ridiculous or absurd, will make complete sense.