The NDP is trying to make a name for themselves by protecting that most sacred of Sacred Cows in Canadian Politics, the gun registry.

It’s failed on every front imaginable, yet even NDP leadership candidate Nathan Cullen, who voted FOR scrapping the registry before, is now “seeing the light” and wants to save the miserable cow.  Apparently his constituents have now given up all their firearms and support their MP’s total about-face on this issue.

Yeah… I doubt it.

Someone came up with some fun parodies of the NDP ads that couldn’t get their facts right.

Here they are with some fun commentary from me to ease your way into a fine Saturday morning. 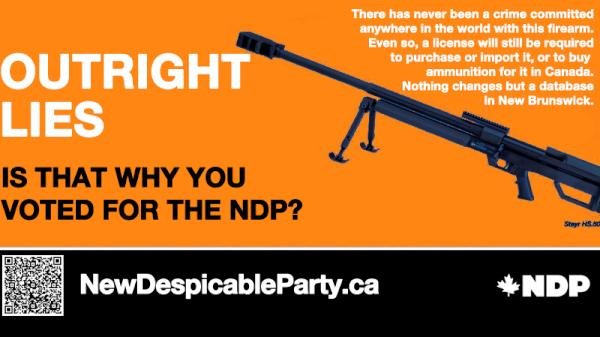 The original version of this ad carried a picture of a restricted version of the Mini-14.  Killing the gun registry will not change the status of that firearm, no matter how badly the NDP wanted to say it.  They did manage to catch their error before going ahead with their campaign, but in their haste to find a “big, bad and evil firearm” they decided on the Steyr .50 calibre single-shot sniper rifle.

While it is indeed true this firearm is non-restricted and will no longer be subject to registration, how many gang bangers do you think are going to spring for the $4,000 price tag of this baby, and then pack the 35 pound, 5-foot-long rifle around with them as they commit their crimes?

I’m a gun guy.  I know a lot of gun guys.  Of all the hundreds of firearm owners I know personally, I only know one man who actually owns a .50 cal rifle. He doesn’t shoot it much, since it costs about $6 per round to shoot it.  That gets expensive in a hurry. 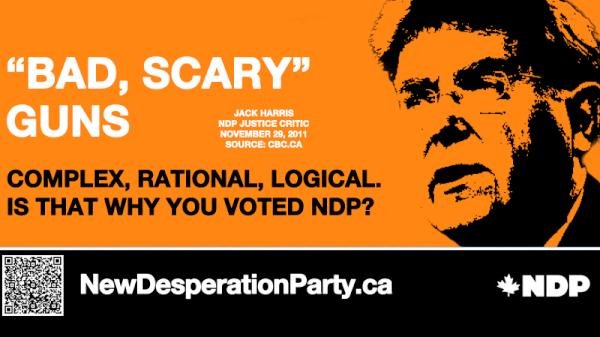 Canada has had the policy to ban “bad, scary guns” since the Sacred Cow was first introduced into law.  Senseless things like the type of stock a firearm has can be the difference between making it a restricted rifle, when the exact same firearm with a boring wooden stock is non-restricted.

If you take your single-shot shotgun and cut the barrel down to 18 inches you’re a criminal and your shotgun is now a “prohibited device” yet a pump action shotgun with a 12 inch barrel is perfectly legal and non-restricted because it came from the factory that way.

The lists of restricted and prohibited firearms are filled with guns that “look bad” simply because they have a black polymer stock with a pistol grip on it.  The same firearm without that stock? Non-restricted.

Under current Canadian law, a single-shot Derringer pistol is prohibited because it’s so dangerous, yet my Ruger 10-22 rifle with its 50-round magazine is not.

Canada’s gun laws are an ass, pure and simple, created by people who hate guns and will stop at nothing to strip Canadians of their historical right to own firearms.

If the NDP wants a police state where only police, miliary and criminals have firearms, so be it.

That’s not MY Canada, though, and I’ll happily support any politician or government that’s willing to trust me.

As I wrote the other day, millions of Canadian firearm owners didn’t murder anyone today.

We’re not going to kill anyone tomorrow, either. 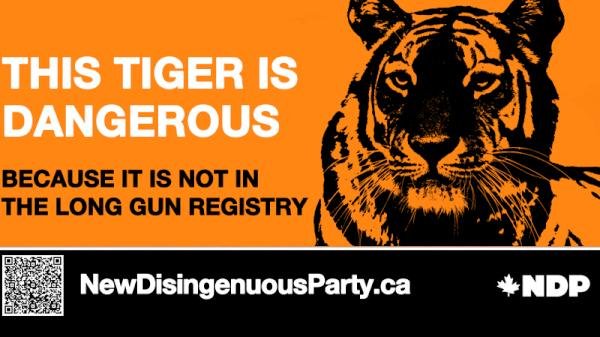 A registration certificate is a 2 x 3 card with some general information about an individual firearm.

Are the NDP and gun-grabbing fanatics like Windy Wendy Cukier and Lying Heidi Rathjen seriously making the case that a piece of paper beside a firearm is all that keeps someone from using that firearm in an evil manner?

Well, if that’s the case, then Thank God for Big Government, because I’m not sure how the world survived for millions of years without the likes of them in control over our every decision!

Now, a simple question for Windy Wendy and Lying Heidi:

Since Windy Wendy will never tell you the truth on this one, the answer is lawful governments, and by many orders of magnitude.  Governments killed millions of their own citizens in the 20th century alone.

But my Ruger .22 rifle will magically become the all-consuming danger to society once the gun registry is gone.