Late in the evening on November 28, 2011 Buddy Herron stopped to help what he thought was a stranded motorist with a broken-down vehicle.  It was the last act of good will of his life. 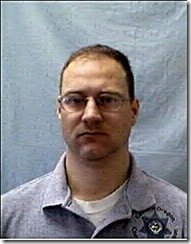 Shortly after stopping to help someone, Buddy Herron made a 9-1-1 call in the last dying moments of his life.  The person he had stopped to help had stabbed him repeatedly, left him for dead and stolen his truck.

The piece of human garbage that murdered Buddy Herron was caught about an hour later after leading police on a high-speed chase that left Buddy Herron’s truck smashed at Exit 180.

Joshua Charles Weeks, 22, was arrested and charged with murdering the corrections officer and will, I pray, be prosecuted to the full extent of the law.

Buddy Weeks succumbed to his injuries at St. Anthony’s Hospital in Pendleton, Oregon, shortly after being rushed there in an ambulance.

The family man leaves behind his wife and four children who are all devastated by the senseless killing of their husband and father.

Umatilla Sheriff John Trumbo expressed the sentiment of pretty much everyone, especially those in law enforcement when he said,

“It’s a brother in arms who tried to do what we do — stop and help someone. We’re all very upset.”

The killer is currently being held without bail and even Weeks’ mother wants to see him punished for his crimes.  She is quoted by her husband, Rickey Neth,

“She told me, “Prosecute him to the full extent of the law,'” Neth said.

Weeks is being held without bail after being formally charged with murder in the courtroom of Judge Lynn W.Hampton, who scheduled a preliminary hearing for December 7th, 2011.

The memorial service for Buddy Herron will be held this coming Monday, December 5th, at 11am at the Vert Auditorium, located at the corner of Fourth Street and Southwest Dorian Avenue in Pendleton, Oregon.

My thoughts and prayers go out to the entire Herron family as they seek to deal with the tragic and senseless loss of their husband and father.