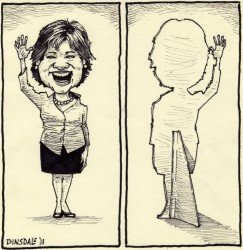 While hardly a surprise, I was holding out hope that the so-called “savior” of British Columbia, unelected Premier Christy Clark, would actually stand up to Ottawa and show the citizens of this fine province who is running the show.

Apparently, the answer to that is quite simple: Ottawa.

Yesterday, just one hour after word leaked that BC and Ottawa were about to sign a deal that would subject British Columbians to another 20 years of RCMP rule, Ex-Newfoundland Premier Brian Peckford and the leader of the BC Conservative Party presented a report that called the RCMP “inept and outdated.”

Those enamoured with Christy Clark’s ongoing (endless?) election campaign are naturally quick to defend both the unelected Premier and the RCMP.

However, as anyone who reads my columns on a regular basis will already know, Mr. Peckford’s report makes it quite clear that the RCMP has a very long way to go in restoring public confidence in that once-proud crime-fighting force.

“It is impossible to come away from even a cursory review of the material with a positive view of the RCMP.

A once proud force highly regarded both nationally and internationally has become inept and anachronistic. No doubt there are many hard-working, honest officers doing an admirable job all over Canada. But their structure and leadership and some of their fellow officers have let them down.”

In a word, precisely.

The RCMP does have many fine constables both here in BC and across the country.  Just yesterday I wrote about one of those inspiring examples, Constable Jim Moir, who sacrificed himself to save a 15-year-old girl from being crushed by a sanding truck.

Whether true or not, the perception here in British Columbia is certainly that RCMP members like Constable Jim Moir are in the minority.

I could easily list dozens of names of RCMP members who do not fit the Jim Moir mold.  If you want a laundry list of what’s wrong with the RCMP, just click on my Police Misconduct category and you will spend the better part of the next two days reading articles all about it.

That being said and even though I seem to have an endless series of bad cops to write about, the reality is, at least, a little different from the perception.

Over 6,400 RCMP members are stationed in British Columbia.  That is almost one third of the entire RCMP force.

That’s a staggering statistic given the size of our nation.

While I hardly write about EVERY case of RCMP misconduct (who can?), I do write about a lot of them.  If I’ve written about 100 bad cops here in BC, that amounts to 1.5625% of the RCMP members currently stationed here.

Triple that to include the ones I haven’t written about and the ones the public isn’t aware of yet, and we get to roughly 4.7%.

The sad and pathetic reality is that police forces, the RCMP included, are made up of human beings.  Human beings will always be subject to failure on ethical and moral grounds.  That is simply a reality of our world.

We will always have bad and/or corrupt cops.

There is no way around it.

Almost 5% of a province’s police force being guilty of misconduct or worse is, in a word, unacceptable.

What the RCMP is lacking, however, hasn’t got anything to do with whether or not it has bad cops.

It’s got to do with the culture of secrecy and that Fat Blue Wall institutionalized by the RCMP Brass that has the force going to extraordinary lengths to protect and defend the most heinous actions committed by its members.

That’s the true failure of the RCMP in British Columbia and Canada as a whole.

It has nothing to do with whether or not we have bad or corrupt cops.  Every police force will have them to one degree or another.

How we deal with those bad cops is the true measure of any police force.

The true failure of the RCMP in British Columbia (and the rest of Canada) is that the corporate culture of the RCMP is to protect and hide those bad apples, instead of ousting them immediately.

Were the RCMP to take a Zero-Tolerance Policy against conduct and criminal violations by its members, we could restore confidence in the RCMP inside 6 months.  It wouldn’t take any time at all.

Unfortunately, until the RCMP’s internal culture changes, until those in charge of the RCMP are willing to side with the public instead of corrupt cops, nothing will change.

The solution is quite simple.

Implementing those solutions, of course, is where the rubber hits the road.

Given that our unelected and so far unaccountable Premier, Christy Clark, has just committed BC to another 20 years of RCMP rule without addressing these concerns doesn’t bode well for the next Ian Bush, Robert Dziekanski or Orion Hutchinson, does it?