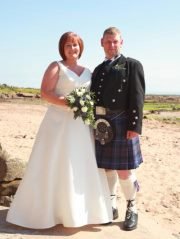 I’ve said repeatedly that not all RCMP constables are like the sad examples that I so often cite on this site.  RCMP Constable Jim Moir is one such decent constable.

Constable Moir’s case happened almost a year ago, and I’m not sure why I never heard about it at the time, especially since it happened only an hour down the highway from Lytton.  Be that as it may, I’d rather commend a man like Constable Jim Moir late than not at all.

Last February Constable Moir was attending a vehicle accident in Yale, BC.  The Troy’s family vehicle had slid off the icy road into the ditch. Constable Moir was outside the vehicle and standing beside 15-year-old Buffy-Anne Troy when a sanding truck began to slide toward them.

Without a second thought Constable Moir pushed Buffy-Anne into the ditch to protect her as the sanding truck slid into him, crushing his leg between the two vehicles.

“I feel amazed that he would do that,” Buffy-Anne Troy said.

“He’s a real hero because if it wasn’t for him, I would be seriously injured or dead. I’m so grateful.”

Most of the time it does not even mean much actual sacrifice.

Occasionally, however, doing the right thing does come with a high personal cost.  In the case of Constable Jim Moir, that personal cost was having his leg being crushed by a vehicle.

How is this The Right Thing?

It’s The Right Thing because making that instinctive decision to save Buffy-Anne Troy’s life by tossing the 15-year-old to safety meant placing her life ahead of his own.

It’s the kind of thing we expect from the men and women who are sworn to protect us in times of trouble.

“This was obviously a split second decision where the constable realized what was happening, and his first thought was to do whatever was necessary to protect this girl,” said Sgt. Peter Thiessen.

“He clearly put her safety ahead of his own.”

Constable Moir is lucky to be alive, there’s no doubt.

His leg probably took many months to heal, and it’s doubtful he will ever have full mobility with it ever again.

Yes, the price of being a hero can sometimes be high, and while he may never have the full use of his leg again, I’m certain he has the gratitude of Buffy-Anne Troy and her entire family for his actions that icy February day.