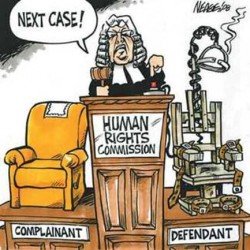 Thirty-four years ago Canada passed one of the most absurd and Freedom-crushing laws in human history, granting Canadians the “human right” not to be offended.  The abomination that is 1977 Canadian Human Rights Act was rammed through Parliament by none other than that most Marxist of Prime Ministers, Pierre Elliott Trudeau.

For many reasons I’ve never thought much of Trudeau, but making it a crime for anyone to “communicate” anything that caused someone to take offense to said “communication” has got to be near the top of my list.

There is no such thing as a human right not to be offended.  Creating such a right only makes a complete mockery of our legitimate human rights, such as Life, Liberty and Freedom of Speech.

Thankfully Section 13 of the Canadian Human Rights Act is about to be history, and not a second too soon.

Already on death’s doorstep thanks to the Marc Lemire case, Section 13 will be wiped from the face of Canadian jurisprudence thanks to a Private Members Bill, C-304. put forward by MP Brian Storseth (pdf of his introductory speech).

Can you imagine wasting half a MILLION dollars prosecuting the likes of Ezra Levant over some radical Imam’s supposed “hurt feelings”?

That’s precisely what the Alberta government did using the Alberta version of Section 13, taking almost a full three years to do so before eventually dropping the case because of all the lousy publicity they were getting.

Here is the text of Brian Storseth’s speech introducing his bill to Parliament:

Mr. Speaker, it is an honour to rise in this House today and introduce a bill titled “An Act to Amend the Canadian Human Rights Act (Protecting Freedom).” Freedom of Speech is a fundamental principle in our democracy and one in which Canadians have fought and died for, for more than a century.

This is not a fight that one Canadian can take on himself, but rather, an issue that all Canadians must engage in vigorously. In this I would like to thank my friends and colleagues, such as Senator Finley and The Member from St. Catherines, who have rigorously pursued a freer, more open society and resisted the tyrannical instincts of bureaucracy to censor speech in our country.

Mr. Speaker, Freedom of Speech is the freedom that all other freedoms are built on, it cannot be restrained to the politically correct, the best way to fight bigotry is to ensure that we protect and enhance our fundamental freedoms in this country. That is why I ask all Members in this house to support this bill, a bill that protects one of the building blocks of our great democracy, the Freedom of Speech.

Whenever government bureaucrats seek to silence an individual because what they have to say is, perhaps, unpopular or flies in the face of so-called conventional wisdom, Freedom suffers.

If the measure of a nation is how easily their citizens’ feelings are hurt, then you simply don’t have much of a society.

Take the case of comedian Guy Earle’s case here in British Columbia.  Mr. Earle was fined $15,000 for hurting lesbian Lorna Pardy’s feelings as she was making out with her then-girlfriend in the front row of the restaurant where Earle was performing his weekly standup comedian routine.

Who knew that hurt feelings could be worth so much?

Of course folks like me and perhaps you (white heterosexual Christian males) need not file a complaint with any of the nation’s Human Rights Commissions.  White heterosexual Christian males are not one of the “protected” classes of Canadians who are allowed to make money off their hurt feelings.  That privilege is reserved for those Canadians of other sexual persuasions, religions and ethnicities.

Such is the sad and pathetic state of “equality under the law” in Canada.

Believe it or not people… gay, straight, or whatever… and contrary to the moronic ruling in Pardy v Earle (April 20, 2011 Decision — 107 pages), “being offended” is not a violation of your Human Rights.

I read through the entire United Nations’ Universal Declaration of Human Rights and the Canadian Charter of Rights and Freedoms and guess what… it’s not there.

Like in Orwell’s masterpiece Animal Farm and thanks to that disgusting excuse for a Prime Minister, Pierre Trudeau, some Canadians are just a little more equal than others.

All that is about to change thanks to Brian Storseth and his Bill C-304.

Normally Private Members Bills stand about as much chance of passing as a snowball does in that very hot place down below, but Storseth’s Bill C-304 has been anointed by Canada’s Justice Minister Rob Nicholson.

Justice Minister Nicholson endorsed Storseth’s bill and called on all other MPs to support Bill C-304 as well.  That’s great news and should spell the end of the terrible “crime” of hurting someone’s feelings.

As Ezra Levant noted in his column the other day:

This is the best thing the Harper government has done in five years.

Freedom is on the march.

The cause of Freedom does indeed seem to be gaining ground in Canada and this is a very, very good thing.