Today is a very sad day at the Canadian Forces Base in Trenton, Ontario.  Sgt. Janick Gilbert returned there today after giving his life to save a couple of strangers near Baffin Island in Canada’s Artic Region. 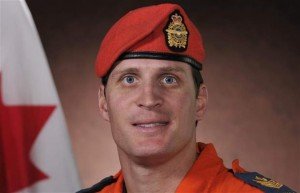 Gilbert and two other soldiers parachuted into the frigid waters near Igloolik, Nunavut, in an effort to rescue two boaters who appeared to be in serious trouble.

There is no official word on what caused his death, but parachuting into the water will have some obvious risks.

He is being remembered as a man who was the “consummate professional” who had a strong sense of duty and service to others.

“A brilliant operator with thirteen years of experience, Sgt. Gilbert will be sorely missed by all within the SAR (Search and Rescue) Tech trade and by all those who have had the pleasure of making his acquaintance,” Friday said in a statement. “His laughter and ‘joie de vive’ are only some of the many positive attributes that were so cherished by those who knew him.

“Janick lived by what the SAR community believes in and exemplified the meaning of rescue; he gave his life (so) ‘that others may live.'”

“The Canadian Armed Forces’ search-and-rescue technicians are some of the best trained in the world, and have saved thousands of lives nationwide. Sgt. Gilbert was an extremely brave Canadian who made the ultimate sacrifice while proudly serving his country.”

There is no such thing as a “routine” Search and Rescue mission, and while generally these heros have things go precisely as they’ve trained for, yesterday’s tragedy shows that no matter how hard you train, sometimes circumstances just don’t go your way.
Sgt. Gilbert is survived by his wife and children, and it is with them that I would encourage you to offer your thoughts and prayers today as they struggle to come to terms with the loss of husband and father.