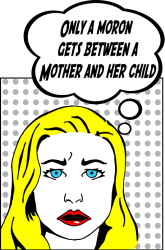 A scumbag wandered into Del’s 24 Hour Food Store in Naples, Florida, the other day and decided he was going to rob the place.  Now, that’s bad enough… stealing from some hard-working store owner just trying to make a living.  But this particular scumbag decided to compound his stupidity by attempting to steal one of Elizabeth Easterly’s babies as well.

The unidentified scumbag won’t be tryng that ever again.

He’s dead.  Elizabeth Easterly shot him to prevent him from stealing her 1-year-old child.  He later died from his injuries.

No, I won’t be shedding a tear for him, either.

Elizabeth is the clerk working at her grandfather’s  store at the time of the attempted robbery, where she wasn’t about to let some scumbag rob her AND steal her child at the same time.

She shot him…  just the way her grandfather had taught her to.

Thankfully both of Easterly’s children were unharmed, although they’re no doubt a little shaken up by all the commotion and gunfire. At least they are safe and sound with their mother, just as they should be.

Yesterday I wrote about pedophiles trying to claim they have rights and how “minor-attraction” pedophiles shouldn’t mess with Ted Nugent’s grandchildren.

Well, today’s message is that it’s not just pedophiles who should be wary of parents and grandparents… thieves should leave children alone, too.

Stealing money is one thing… stealing a child as the mother watches you do it is just plain dumb; so dumb this particular moron ended up paying for it with his life.

I personally commend Elizabeth Easterly for her actions. She did what was required to keep her child safe.

As far as I’ve been able to uncover, while she wasn’t happy about being robbed, she wasn’t going to shoot this moron if it was only the money he was stealing.  It wasn’t until he put her child’s life in danger that she put her foot down, so to speak, and said to herself, “That’s not gonna happen!”

Is stealing a few bucks really worth your life?

For me the answer is crystal clear, but I guess for some folks it’s not.

My sympathy will be going out to Elizabeth and her entire family as they help her deal with the fact that in spite of doing exactly what was required to keep her children safe, a person lost his life.  She’ll need help and encouragement to get her through this… for taking a life is not an easy thing to live with.  But she should, I hope, rest easy knowing that her actions kept harm from coming to her baby.

That’s a mother’s duty, after all.  To keep her children safe, no matter the cost to her personally.

As I said, my thoughts and prayers will be with you and your family as you deal with yesterday’s events.