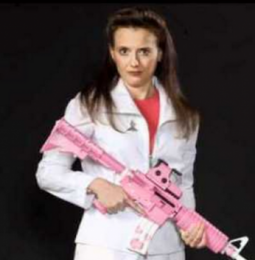 If you haven’t heard of Ann Barnhardt yet, I’ve gotta say… I’m surprised.  She leapt onto the scene a few months back after some moronic United States Senator decided that tossing out the Constitution in favour of Sharia Law was a fantastic idea.

Ann took great offense to this notion and proceeded to tear Lindsey Graham a new asshole because, I imagine, his current one was blocked and wouldn’t let his stupidity pass naturally from his body like God intended.

Her critique of Graham’s anti-First Amendment comments and of the Koran have reached legendary status, and I highly encourage you to check that two-parter out if you haven’t seen it before.

Ann is no dummy and she does her homework.  She’s a practicing Roman Catholic, but I’m not going to hold that against her.  Perhaps I’ll have the chance to bring her over to solid Reformed Theology one day soon.

Anyhow, here’s the links to her first two videos:

What’s so awesome about Ann is that she doesn’t hide from muslim terrorists.  She goes so far as to dare them to come get her at the end of the second segment above.  She is utterly committed to her position and utterly fearless in putting her views forward.

Kinda hard not to admire that… isn’t it?

That’s just the slightest tidbit of background for what’s ahead.

Ann has done a lot of homework into Islam and presents it all in a 4-part series called Islamic Sexuality: A Survey of Evil.

You can watch the entire series below.

Ann backs up each of her statements with facts and research.  Bear in mind that a lot of what she talks about in this series will make many uncomfortable, and the images she uses, taken directly from islamic websites that proudly display them, are disturbing, to put it mildly.

The following references were provided by Ann Barnhardt, to supplement her video:

Here are the four videos.  It will take you about an hour to watch the whole thing, so grab a coffee, get comfortable and prepare to be educuated by a woman who has bigger balls than most men I know.