A Vancouver restaurant, Edible Canada, bans men from peeing standing up……  The restaurant, located on Vancouver’s trendy Granville Island, is the latest to issue stupid edicts to its patrons….. 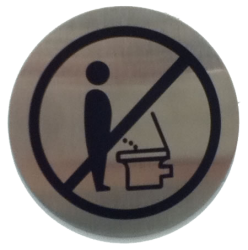 You can’t make this stuff up…..and wait!!!!……It gets better…….not only are men banned from peeing standing up…..but urination and defecation at Edible Canada is now a “community” activity. Men and women now must share communal bathrooms. Gone is the ability for women to privately interact with daughters, gone is the privacy for women and little girls.

I contacted Edible Canada at their corporate office in Vancouver and spoke to an “Erin”.  The owner, a Mr. Eric Pateman wasn’t available for comment. Mr. Pateman has decided that the best way to garner a little free advertising and publicity for his restaurant, Edible Canada, is to use women and young girls as guinea pigs in his little social experiment.

During my conversation with Erin as she spoke on behalf of Edible Canada, Erin couldn’t stop laughing while she spoke in glowing terms about the efforts of Edible Canada to turn a very private activity into a “community affair“.

I left my contact information with Erin, and when she heard I was from Alberta, you could almost hear the gag reflex in her voice. Apparently my place of residence, Alberta, indicates a prima facie inability to “understand” the new reality as it relates to the privacy required by young girls and women.

The reality for Edible Canada is that Eric Pateman, feeling avant garde, has placed women and children in a precarious position.

1. A woman who has suffered a brutal rape that has left her in a mental state that is horrifically and permanently damaged. She struggles from day to day trying to rejoin the population with respect to a sense of normality in her dealings with men and women during the ebb flow of her life. She struggles with a choking, blinding fear of being alone with men or with men in areas or situations of isolation and vulnerability.

Eric Pateman has decided to act as a therapist and place this woman in the midst of men who are urinating, defecating, pulling their pants and zippers up………oh how cutting edge……how Euro-Chic…..how artistic…..how dynamic…..how utterly bloody ridiculous!!!

2. A woman who has suffered sexual molestation as a child that has left her in a mental state that is horrifically and permanently damaged. She struggles from day to day trying to rejoin the population with respect to a sense of normality in her dealings with men and women during the ebb flow of her life. She struggles with a choking, blinding fear of being alone with men or with men in areas or situations of isolation and vulnerability.  She remembers the footsteps coming down the hall and the rape and sodomy she suffered as a child.

Eric Pateman has decided to act as a therapist and place this woman in the midst of men who are urinating, defecating, pulling their pants and zippers up…..oh how cutting edge…..how Euro-Chic…..how artistic…..how dynamic…..how utterly bloody ridiculous!!!

3. A little girl who has suffered a brutal regimen of sexual molestation being raped and sodomised repeatedly, her mental condition can best be described as fragile. She routinely wakes bathed in sweat and screaming as her nocturnal tormentors return to her dreams every night only to let her relive the horrors she has endured. During the days she is cautious, timid and frightened and she clings to her mother and father.

They go out for a lunch at Edible Canada. Before lunch she has to go to the bathroom. Now she finds herself, in a state of vulnerability, waiting to engage in a very private activity, but surrounded by men and boys…..she is terrified to the point of incoherence….but this matters not to Eric Pateman…he is on the cutting edge of his new social experiment….this little girl is simply fodder for his little publicity stunt…..

This little girl and her mind numbing fear is of no consequence to Eric Pateman as Mr. Pateman is building his brave new world…..oh how cutting edge…….how Euro-Chic……how artistic…..how dynamic……how utterly bloody ridiculous!!!!

In bringing this matter to the attention of Edible Canada and speaking to “Erin” I touched on the subject of vulnerable young girls and women who had suffered sexual harm, I also touched on simply the common sense need for privacy that demands the separation of genders during a private bodily function when it is engaged in in a setting away from the comfort and confidence of home………..the response……Erin laughed and laughed and laughed.

In fact, Erin could not speak with any particularity to the needs of women and little girls but only offered more laughter. Erin also pointed out that “thousands of other retail and restaurants did the same thing“…..

I asked Erin to name one…….Erin couldn’t even name one but instead responded by saying that she was becoming uncomfortable with my questions…..I then asked her if she was feeling as uncomfortable as the little girls and women that both she and Eric Pateman were toying with…….Erin got very, very quiet.

I am not the sort of person who sees an “ism” in everything from long-distance calling plans to breakfast cereal but any reasonable person would find, in the stupidity of Eric Pateman, an open threat to children. Caution, nay, justified prudence and rational fear, considering the world we live in and the emergence of pedophiles and attempts to legitimize the same, dictates that telling our children not to talk to strangers is good advice and certainly, advice that may save their lives.

Now we have the tight fisted and short sighted placing our children in a position that may very well do them harm….imagine that…dinner at Edible Canada, during which your little girl can be placed in close proximity to the likes of a titillated Clifford Olson or Karla Homolka…….oh how cutting edge…….how Euro-Chic……how artistic…..how dynamic……how utterly bloody ridiculous!!!!

The reality is this sort of outrageous, sneering stupidity is incredibly callous and indifferent to the feelings of women and children….but I guess all that is lost on “Erin” and Eric Pateman as they tread on the vulnerable to make a buck and reduce their advertising and operating costs.

You never know….they may have decided to move the kitchen of their bistro into the toilet area to “cut costs” and “enhance the dining experience”……..or perhaps the Edible Canada staff will decide that washing ones hands after wiping one’s bum is so “redneck”, so “passé”, so “90’s………as a result, should one summon up the courage and darken the doors of edible Canada, one should beware a rather unpleasant fragrance drifting off your plate of the “Pride of Edible Canada”…….it may smell like poo-poo but Eric Pateman will tell you differently….Eric Pateman will tell you that its “Eau De Brave New World”………