From our friends in the UK comes a tale of environmental woe: 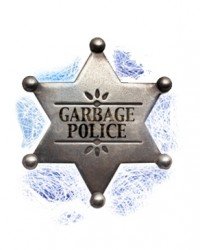 In 2010, the Council of Nottingham issued 227,680 warning letters to people who breached the waste refuse regulations. They followed this with 45,186 official statutory notices threatening fines and issued 1,200 penalty notices stating that the fine had been issued. People can be fined up to £1,000 for putting trash out on the wrong day, incorrectly sorting material for recycling and, unbelievably, placing the trash in the wrong place, which can be less than one foot from its desired location! Environmental responsibility is one thing, but this is ridiculous.

It’s not businesses who are suffering from the onslaught. Instead caring homeowners are being attacked for their lack of recycling efforts. When going green came into fashion and recycling became the buzzword, most Britons took to the task with pride and dedication, and not a little healthy competition among neighbours. As well as recycling waste paper, glass, bottles and old clothing, some even used composters. When the eco-nanny state resulted in paying for plastic bags at the food store and high gas prices they went along with that too. But they never expected that they would one day receive a personal visit from the waste police to check on how they had disposed of teabags.

It’s sad, but true. A 74 year old man from Blackburn, UK, received a polite warning that his trash wouldn’t be removed at all because he had put a teabag in with other trash when it should have been placed in his food recycling container. High treason, indeed!

Ironically, in Britain, over-regulation of recycling and environmental protection laws is having the opposite effect to the one intended. Brits are starting to recycle less because of the pressure from the bin police to ensure everything is recycled correctly. Instead of ‘reduce, reuse, recycle’, it’s ‘panic, fines and what goes where?’

The British are not bothered by the need for different containers to separate all the waste; the trouble is the fines for making minor mistakes. They’re fed up with being bullied by people who seem to have nothing better to do, but who is really to blame?

The authorities argue that European rules on landfill reduction are to blame for the harsher regulations. Shifting waste collection from weekly to every two weeks, say the councils, will reduce the amount going to waste centres, as long as the public sticks to the 3Rs.

The only problem is that the rules are different for every area. In one zone people will need to separate food waste while in the next zone citizens won’t need to. Some zones have six waste containers while others have one. If this goes on, in the future, home owners won’t just have to consider schools and other amenities when moving home, but the bin police rules too!

Here’s how silly it gets. A famous singer put her trash out a day early because she was about to go away on tour. She received a £100 fine for placing her ‘wheelie bin’ in the right location at the wrong time. She was trying to help by making sure the waste was collected and not sitting at home raising maggot families while she was away.

The British want to recycle and help slowdown global warming as much as anyone, but they are hot under the collar about the fines. The British government has suggested that the fines will be stopped for all but the most terrible offences, such as illegal dumping. That’s now on the rise because people are giving up on trying to prepare their waste correctly – it’s just too hard. Compared with keeping up with the regulations or trying to take waste to a government facility, dumping waste on the side of a busy highway is starting to look good. Food for thought.