Anyone reading my articles about thuggish RCMP constables and corporals will no doubt be a little surprised by my choice of RCMP Constable Andy Yung as my #2 reason for getting the RCMP out of British Columbia.  He certainly would never have been my first choice if he hadn’t hit the headlines just this past week.  There is one man who had this spot locked up solid (RCMP Corporal Monty Robinson), but his long and sordid story will have to wait for the next article in this series.

1. While on a protection detail at the 2008 Conference of Defence Ministers of Americas, held in Banff, Alberta, Constable Yung got drunk and fired his service pistol through the ceiling of his hotel room.

2. The absolutely ridiculous “sentence” if you can even call it that, that Yung received for his actions.

As I wrote back in April of this year….

For his crime, firing his service pistol and launching a round through the ceiling into the room above him while he was providing security at the 2008 Conference of Defence Ministers of Americas, he’s been sentenced to… wait for it… zero jail time, an absolute discharge, NO firearms prohibition and will be docked a whopping 5 days pay. One more time, the RCMP disgusts me.

Constable Yung was transferred to the Williams Lake, BC detachment last April, right about the time his disgraceful conduct hit the newspapers.

RCMP Constable Andy Yung is the kind of man we do NOT want as a member of the RCMP, let alone one who is serving in British Columbia!

To quote David Eby of the BC Civil Liberties Association (BCCLA):

“We hold police officers to a higher standard. It’s a huge trust position so if an officer has pled guilty to a criminal offence, we really should be asking whether or not they should remain police officers at all.“

We MUST hold members of our police forces to a higher standard.

Constable Yung’s drunken stupidity isn’t the first problem he’s had with his good judgment, or should I say his lack of it.

There are laws in Canada, and penalties for breaking those laws.  They only apply to us “regular folk” though, don’t they?   They sure don’t apply to our nation’s Protected Class, RCMP members.

RCMP Constable Andy Yung should have been kicked off the force for his two previous crimes.  Instead he is protected from on high by the RCMP Brass and is shipped off to British Columbia, which has been called the RCMP’s dumping ground by more than one RCMP watcher across this nation.

That’s all just background on this guy.  Why he hit the front page of newspapers around the country this past week is because he is now stationed in Williams Lake, British Columbia and is accused of beating the crap out of 17-year-old native woman Jamie Haller. 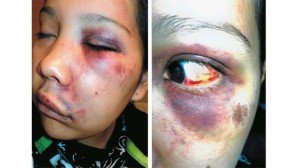 While Constable Yung has not been formally charged in the case yet, he surely will be charged soon.

The truly heinous thing about the Jamie Haller case is that Yung and another RCMP member were supposedly coming to her aid as she was being pursued by members of a local native gang.

There’s not much worse than trying to escape the clutches of one violent gang only to land in the hands of another gang, the RCMP.

“They didn’t even say anything to me,” Jamie says.

“They just came and grabbed me and picked me up and dragged me over by the road, and they just put handcuffs on me. I was the one being chased, and they roughed me up and put me in the car. All I wanted was to tell my mom what was going on.”

That’s just gotta be disheartening… to land in the hands of what you think is safety only to be handcuffed, tossed in the back of an RCMP cruiser where you have the crap beat out of you by the very people who are supposed to protect you.

“I know for a fact that he punched me more than six times,” says 17- year-old Jamie Haller.

This “incident”, as the RCMP likes to refer to brutal beatings by their members, happened on September 10, 2011 and is now being investigated by the Abbotsford Police Department.  This is the same department that investigated RCMP Constable Geoff Mantler after that thug was caught on tape brutally kicking Buddy Tavares in the face.

I hope the Abbotsford Police Department is equally as quick in completing their investigation in the Jamie Haller case and recommend charges against Constable Yung.

“The community needs confidence that these serious allegations will be investigated fully, promptly and as impartially as possible under our current system.

If wrongs were committed, the public wants to know that they will be dealt with in accordance with the law — whether those involved are employed as law enforcement officers or are members of the public,” said BCCLA president Robert Holmes.

“The community needs to trust that when someone calls 911 for the police, they will be treated with respect and not end up in hospital because of injuries sustained due to police actions.”

Whether they do or don’t, of course, there are bigger questions that face the residents of British Columbia.

Why haven’t we told Ottawa to pound sand after their threat to “withdraw RCMP services” from British Columbia if we don’t sign their “take it or leave it” contract like Alberta and Saskatchewan just did.

If you live in British Columbia, please call your local MLA and demand an answer to that question.  Better yet, go into their office and don’t leave until you get an answer.

Phone calls and faxes to BC Premier Christy Clark are also a good idea.  She needs to know that the people of British Columbia want an ACCOUNTABLE provincial police force, not 20 more years of Thugs R Us.