There’s nothing more heinous than a man murdering his wife, and nothing outrages the public more than releasing that [alleged] murderer on bail, apparently just because he’s an ex-RCMP member.

I’ve written alot about the double-standard for treatment of [alleged] criminals and ex-RCMP Corporal Keith Wiens is yet another stunning example of why British Columbia needs to get rid of the RCMP.

Were the [alleged] murderer you or me… you know… just some regular person, there wouldn’t be any hope of being released on bail.  The double-standard for RCMP treatment that applies even to their retired members comes to the rescue for Keith Wiens though, doesn’t it?  Like all RCMP members both past and present he’s just “a little more equal” than the rest of us. 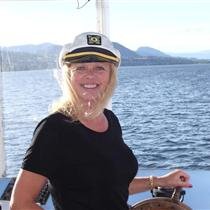 On August 16th, 2011 Lynn Kalmring was shot and killed in the home she shared with her fiance, ex-RCMP Corporal Keith Gregory Wiens.

Cause of Death: a single gunshot to the head.

Keith Wiens was arrested at the scene of the crime by Penticton RCMP members and despite the seriousness of the crime, it seems he’s been treated with kid gloves ever since.

His bail was set at a pathetic $50,000, which tells us exactly what figure the [in]Justice System places on Lynn Kalmring’s life.

That is beyond pathetic.  It is an outrage.

Like I said, you or I would be sitting in a jail cell until our trials in all probability.  We certainly wouldn’t be getting released on $50 grand bail after shooting our spouse in the head!

There’s nothing quite like the arrogance of a lawyer to point out the double-standard and then defend it.

This is what Corporal Wiens’ attorney Don Skogstad had the audacity to say to reporters:

“This person spent all of his life obeying the law, and half of it enforcing the law,” said Skogstad.

Well, I suppose from the family’s perspective, when you value the [alleged] murderer more than the murder victim, this line of reasoning  makes total sense.

Just a two months after [allegedly] murdering Lynn Kalmring, Wiens is “going home” to live in the scene of the murder.  I guess the RCMP doesn’t have an issue with the alleged perpetrator of the crime having full run of the crime scene.

Let me just say this.  I share the family’s outrage that this guy is back on the street as though nothing happened.  All outward appearances are that this special treatment is because he is an RCMP Corporal.

The conditions of his release are pretty onerous too…

He’s got to live at home and be supervised by his brother.

I’ll bet Robert Picton wishes he could have been treated so… special before his trial.  The cops were at his house for years while he sat in a jail cell.

To quote “eyeswideopen”, who commented on this story in a post at unsolvedcanada.ca,

Justice Peter Rogers has a few things to answer for it seems.  The BC Supreme Court Justice made the decision to release Wiens on this postage-stamp bail for reasons nobody in their right mind can comprehend.

We are not able to comprehend either, because the good judge saw fit to ban the publication of his reasons for releasing the [alleged] murderer back into the community.

Brandy Cummings, Lynn Kalmring’s daughter, was more than a little upset by the ridiculous ruling, and understandably so.

“My mother has absolutely no rights,” Cummings said outside the Kelowna Law Courts.

“This is absolutely absurd. I think the judge was completely wrong and it just goes to show money can buy you freedom no matter what you do.”

Please accept my condolences on the loss of your mother.  This will be one of hardest things you will ever go through.

You need to know that the good people in BC support you and your entire family in your outrage, even if the Justice System can’t comprehend their double-standard when it comes to dealing with cops, both past and present.