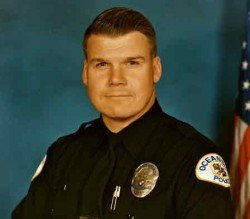 It’s such a beautiful sight to behold in today’s raging wannabe police-state culture: a policeman who not only knows the law, but respects a citizen for invoking his rights.

Officer Matt Lyons, Badge Number 1093, of the Oceanside Police Department was recorded stopping a man who was legally openly carrying a handgun as he walked down the street in Oceanside, California.

It’s such a refreshing change to, for example, Chicago police officer John Killackey.  Killackey is the thuggish little jerk who got drunk, pulled his gun and threatened to shoot a cab driver in the face for daring to ask for the cab fare.

Naturally his commanding officer, a moronic man named Sergeant Robert Peabody, arrived on scene, handed Killackey back his gun and then refused to allow the cab driver to even file a complaint. No wonder Chicago is known as the City of Corruption!

Back to California, where there is at least one good and decent cop alive and kicking!

Yes, it is legal in California to openly carry an unloaded handgun.  Normally though, the cops captured on video seem to not know or care about that, so it is incredibly refreshing to see Officer Matt Lyons do his job with such professionalism and respect for his fellow citizen.

It’s so against the norm.  Police have increasingly become, generally speaking, agents of terror in our post 9/11 era.

Every single citizen is viewed as “the enemy”, and any who dare exercise their Rights are just terrorists-in-waiting.

The recent treatment of those nasty, downright dangerous Lemonade Liberation Freedom Fighters this past August is merely one of thousands of examples I could use.  For those who don’t remember, three “Lemonade Liberation Day” protesters were treated as though they were more dangerous than any suicide bomber.

It’s absurd, yet this is what we have come to expect in our headlong flight into totalitarianism.

Unloaded Open Carry of firearms is 100% legal in many states. It’s the concealed carry of firearms that one generally needs a license for, Alaska and Vermont being the notable exceptions.  Notable, I say, because these two states actually comprehend what the United States Constitution says and lives by it, at least in this one respect.

It’s such a simple concept that has been perverted by generations of “gun-free zone” advocates… advocates that just cannot comprehend the simple truth that all they are doing is GUARANTEEING the next insane killer will have a host of disarmed and defenseless victims at hand.

For morons like this, the lessons of Columbine and Virginia Tech are lost.  These were the “gun-free zones” they advocated for and won… at the cost of dozens of innocent lives.  That, of course, is the part they will never face.  Their policy of civilian disarmament only affects the law-abiding.  The criminally insane like the killers at these two schools were clearly unaffected by the firearms prohibition.  It’s what allowed them the high body counts.

So, to bring this back to my starting point, firearms in the hands of civilians is NOT a crime.  It is our Right.  Guaranteed by the US Constitution and its Second Amendment.

Finding a cop like Officer Matt Lyons who clearly comprehends that

a) there IS a Constitution in the United States,
b) that it contains a Second Amendment protecting our Right to own and carry firearms,
c) respects the Constitution he has sworn an oath to defend, and
d) respects the citizen invoking his Rights under that Constitution.

This kind of cop should be the rule, NOT the exception.  Officer Matt Lyons is the kind of cop every police man and woman in the United States should aspire to become, not the thug cop John Killackey who threatened to shoot a man in the face over an $8 cab fare.

Thugs like Killackey should be stripped of their badges, guns and jobs and then charged with, at the very least, violating their sworn Oath of Office, namely to Protect, Defend and Uphold the Constitution of the United States of America.

So, this is my public shout-out to the ex-United States Marine, Officer Matt Lyons of the Oceanside Police Department.

Thanks for knowing your job AND the Constitution!  You make us all proud.

Just before I get you to the video of Officer Lyons in action, I want to tell you a little more about this man and his character.

He donated the royalties from his book to the National Law Enforcement Officer Memorial Fund.

How’s that for a class act?

According to the book description,

“The Oceanside Police Department has provided a century of service to a community that has grown from a small seaside resort—doubling as a bedroom community for the U.S. Marine Corps’s nearby Camp Pendleton—into a city of more than 170,000 people. City marshals patrolled Oceanside from 1888 to 1906, and it is indicative of the city’s formative years that the first lawman, former Texas Ranger Charlie Wilson, was also the first to be killed in the line of duty.

The photographs in this remarkable collection inventory the department’s past, covering the administrations of city marshal J. Keno Wilson (Charlie Wilson’s brother), Chiefs Charles Goss, Ward Ratcliff, and others. Showcased are images from the archives of the Oceanside Police Department and the collection of Delores Davis Sloan, the daughter of former captain Harold B. Davis, Oceanside’s top cop of the 1930s, 1940s, and 1950s.”

Finally, here’s the video of Officer Matt Lyons in action. It’s a beautiful thing to behold.