Congratulations Samantha Stosur on winning the US Open Tennis Championship! 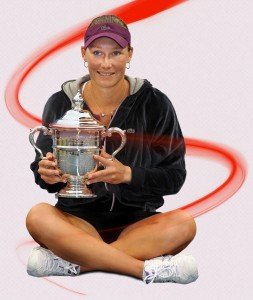 Samantha Stosur played an amazing match yesterday.  It was a pleasure, a thrill to watch that young woman run everything down, serve her heart out, hit winner after winner and all in all, wipe the court with Serena Williams.

It was the performance of a lifetime, and Samantha deserves all the credit in the world for winning handily in straight sets over the person everyone seemed to think would walk away with the trophy without breaking a sweat.

I’m not one for slamming Americans for being Americans, but Sunday showed their arrogance in an ugly manner.

On behalf of tennis fans the world over, Congratulations Samantha Stosur for winning the US Open!  You earned it!

Hey, I figure someone’s gotta say it… Congratulations, that is, since all the moronic mainstream media can seem to focus on is Serena Williams and her atrocious behaviour at the start of the second set.

They seem to have forgotten that someone actually WON the US Open Tennis Championship, and it wasn’t that whiney crybaby Serena Williams.

The only thing more atrocious than Williams’ behaviour and the resulting media frenzy over it is the actions of the US Tennis Association (USTA).

For Williams’ atrocious behaviour and utter lack of respect for the Chair Umpire who, lest we forget, actually interpreted the rules correctly, the USTA deemed it sufficient to fine the Whiney Williams Sister a whopping, get this, $2,000.

If that’s all they’re going to do to set an example, then why even bother.

They might as well have spit in Samantha Stosur’s face.

Two grand to Serena Williams is like a nickel to you and me.  She won’t even know it’s missing, and it certainly won’t serve as a corrective measure for her pathetic behaviour.

Serena Williams, the mainstream media and the USTA ought to be ashamed of themselves, their respective performances and actions, and of their utter disrespect for the woman who fought like a true champion and actually WON the US Open Tennis Championship.

They all owe Samantha Stosur, the 2011 US Open Women’s Champion, an apology.

Of course, I don’t think I’ll be holding my breath waiting for that to happen…

It’s a good thing Samantha Stosur’s name will be engraved on that trophy… given the media attention to the actual Champion, it’s probably the only way we’ll ever know she won.