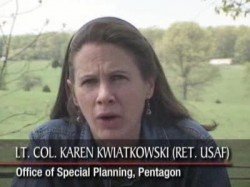 I can’t say it better than Karen Kwiatkowski already has…

Today, we live at the will and by the grace of a dystopian and grasping government. There is not an exceptional amount of time left before this government collapses, but before it does, we the people will suffer far more than we have suffered to date. Banking collapses, mortgage fraud at the highest levels, government bailouts, currency printing, and inflation in food and energy are just a foretaste of the future, led by the same Washington public-private cartel we have suffered for decades. . . .

I believe our government — outdated, unrestrained by the Constitution and soon to default on every debt it has taken on in our name — cannot long endure. But unlike those who run and benefit from our modern American nationalism, corporatism and socialism, I do not fear average Americans seeking self-government, rule of law and liberty.

That’s why on Sept. 11, I will not be celebrating America’s undeclared wars on countries that had nothing to do with the Sept. 11 attacks 10 years ago. I will not be attending remembrances of victims of that day, because those remembrances refuse to count American liberty, rule of law and freedom of trade and movement uppermost on that list of the sacrificed. I will not attend any program offered by a religious or political organization that seeks to ride a federal government bandwagon to confirm some imperative of war against Islam halfway around the world, or that seeks to promote the false concept of a culture war as somehow God’s intent for America.

On this 10-year anniversary, I intend to go about my business as usual, and say a prayer of gratitude for the small freedoms I have left. In the afternoon, I’ll be in Charlottesville, Va., learning about local apprenticeship and crafts demonstrations. In the evening, I’ll check the livestock and gather the eggs. I won’t allow what I personally experienced that day in the Pentagon, nor the subsequent government drumbeats for war, waving the Sept. 11 banner, to diminish my awareness of the meaning of liberty.

The real battle for Americans today is a battle to reassert our independence from an overbearing and unsustainable state. Today, we can all celebrate that there are fundamental cracks in the federal state’s veneer, and we can be grateful for the options we still have in our own lives to live free, to practice charity and faith, creativity and productivity and to rediscover our own power as individuals and communities.
— Karen Kwiatkowski
(1960-) retired U.S. Air Force Lieutenant Colonel, included duties as Pentagon desk officer and a variety of roles for the National Security Agency, author, columnist
9 Sep 2011
http://quotes.liberty-tree.ca/quote_blog/Karen.Kwiatkowski.Quote.54EF