Sadly, the human condition is one that always seems intent on oppressing our fellow human. Once we get our filthy little paws on even the slightest glimmer of power, it goes straight to our heads and we just can’t seem to help ourselves.

A while ago I came across a news story that horrified me.  Apparently so much that I couldn’t even write about it, because when I searched the blog for a link to my previous article, there wasn’t one!

Perhaps I was too engrossed in all the insanity over in Union Bay, British Columbia… I don’t know. Anyhow… before we jump into the torrid subject, here’s a quote to keep in mind as I examine the motives of those behind the atrocious behavior we’re about to see.

Now it’s off to Quartzsite, Arizona, where the latest round of political corruption is spilling over onto the evening news.

The site: a public meeting of the town council.

Jennifer Jones was standing at the microphone spelling out some details about the failure of the current town council to follow their own rules.  She pointed out that the current rules being enforced by the council had never even been passed, and were therefore null and void.

The man who appears to be the head of the local corruption and thuggery, Quartzsite Police Chief Jeff Gilbert, decided he had best step in and stop this uppity citizen from doing the unthinkable: exercising her Right to Freedom of Speech.

Seriously… just who does she think she is?

While she was in the middle of speaking to the gathered crowd Police Chief Jeff Gilbert ordered his officers to forcibly remove Ms. Jones from the meeting and in the video clip of the event we see this happening before our very eyes.

Thugs like this can give all the orders they want.

It is our absolute DUTY to resist unlawful authorities when they are violating our God-given Rights and Freedoms.

Exercising our Right to Freedom of Speech is NOT a crime, as shocking as that notion is to some small-town tyrants like the ones currently residing in Quartzsite, Arizona.

There is a lot more to the story of corruption and abuse of power in Quartzsite, and I’ll get to that shortly.

First, I want to bring this story a little closer to home, and take a look at some of our very own  small-town authorities who seem to believe they, like Quartzsite Police Chief Jeff Gilbert, are Gods and not men.

de Jersey has some very specific ideas of what should happen in Union Bay.  He doesn’t give a hoot if anyone disagrees with him.  It’s his town, and he’ll do with it as he pleases; the actual taxpaying residents be damned.

Sounds harsh, doesn’t it?  It sounds like I might even be a little unfair to Mr. de Jersey.

While I would never rule out any possibility, I doubt I’m mistaken in my assessment of Mr. de Jersey in this particular case.

This past January, while he was still Chair of the Union Bay Improvement District (UBID), Alan de Jersey made the unilateral decision that citizens would be barred from all future public meetings of the UBID board until he deemed otherwise.

There was never a motion put before the UBID board to this effect.  It was simply Alan de Jersey playing God; his making a decree that all good little minions would mind if they knew what was good for them.

He even went as far as threatening police action should anyone show up and protest his asinine decision.

Citizens of Union Bay who disagreed with his vision of the future of their town were to be summarily dismissed, even at the expense of democracy, if need be.

Pretty straight forward.  If you’re going to ban the people from participating in local democracy, then you’d best have a damned good reason for it.

The most important phrase in that bylaw, however, is this:

“except where the board passes a resolution to close the meeting“

The bylaw is perfectly clear, presumably even to Alan de Jersey. He cannot simply make a unilateral decision.  He must present a motion to the entire board, and it must be passed by a majority of that board.

Attendance of public at meetings

de Jersey’s additional sentence notwithstanding, the requirement for a MOTION still remains.  What any normal person would presume upon reading this new version is that the Chair may PRESENT A RESOLUTION to close meetings when the prescribed circumstances exist.

There was an awesome cartoon of Alan de Jersey published in the Comox Valley Record in response to his banning the public from attending public meetings.

I’ve lovingly titled it “Enemies At The Gates.” 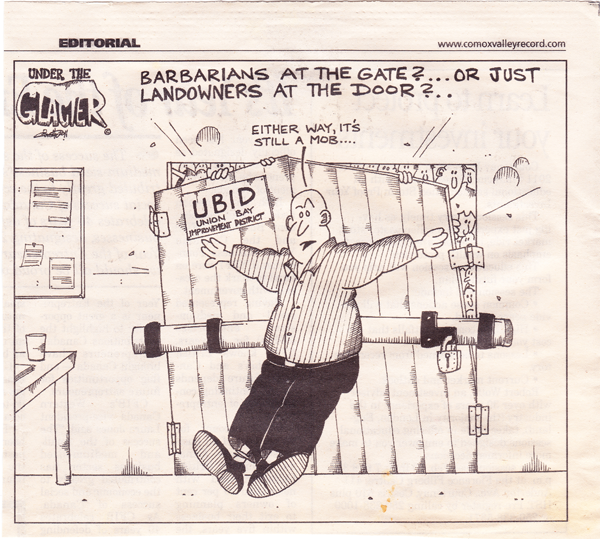 In that same newspaper were some particularly amusing quotes, some of which I’ve included below:

“We are concerned that closing regular meetings of the UBID to the public will allow the board to govern without public knowledge and scrutiny of their actions as elected officials,” Cleve Goldswain said in a news release.

“We will attend all meetings of the UBID board, and we will respect confidentiality issues, but we will keep the public informed.”

UBID trustees Bruce Livesey and Cleve Goldswain — both members of the Tax Payers for Accountable Governance (TAG) group — feel the decision is an “undemocratic action” that will exclude taxpayers from the decision-making process. 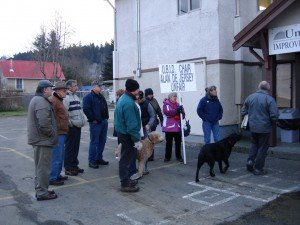 Livesey and Goldwswain are correct, of course.

Barring citizens from public meetings because you don’t want to hear any opinions that don’t match your own is NOT democratic.

But from all the documentation I’ve read over the past month or two, my impression is that Alan de Jersey couldn’t care less about being democratic.

He appears to be just another petty tyrant who wants what he wants, when he wants it.

If citizens are disagreeing with those who hold elected office in a community then perhaps those elected officials need to take a hard look in the mirror.

When citizens get upset with elected officials, it’s usually because those officials are doing things they shouldn’t be, such as suing citizens for having the audacity to exercise their Right to Freedom of Speech.

The town of Union Bay is clearly divided over the issue of developing the area.  de Jersey is firmly behind the developers, and as far as I’ve been able to tell, the town is not.  Certainly the more antics de Jersey pulls, the less support there is for developers in the area.

Issues over clear-cutting land that created potential flood hazards is one of the problems arising; over-subscribing to the only available water source is another.

Like all things on this earth, the water supply for Union Bay is finite and cannot support massive developments.  It is these sorts of issues that have caused the community such heartache in recent years.

Naturally, de Jersey disagrees.  In an article that ran in the Comox Valley Echo on January 18, 2011, de Jersey slammed those who didn’t comprehend his “vision” of the great new world.

The doors are set to be barred to the public when the board of Union Bay Improvement District meets early tomorrow evening. And its chair, Alan de Jersey, told the Echo they are likely to stay that way for some time to come.

That’s because, he claimed, disruption from the gallery and the actions of two trustees have led to a mob atmosphere where business can no longer be done effectively.

“It is, in fact, their actions which are having this effect.”

He said the local Taxpayers for Accountable Governance group (TAG) and resident Mary Reynolds “would have you believe that the administration and board of UBID are tearing our community apart.”

Closing down the public gallery was necessary to allow the Improvement District to operate effectively and efficiently, said de Jersey.

a) are NOT party to the ongoing lawsuit against Mary Reynolds, and
b) unlike Alan de Jersey, Denis Royer, and David Godfrey, did not personally benefit from the motion to spend UBID funds to sue Mary Reynolds.

de Jersey’s decision to sue local blogger Mary Reynolds, one of his most vocal detractors, was the proverbial straw that broke the camel’s back.

In his haste to shut up his most vocal opponent, de Jersey, Denis Royer, and David Godfrey voted to spend what ended up being over $100,000 of taxpayer money suing Union Bay resident Mary Reynolds.

As one local resident pointed out recently:

While I think the actions of the former UBID trustees is a definite conflict of interest, I wonder why no one is pursuing civil or criminal fraud.

Is the lawyer friend of the trustee really that stupid?

Or, was it just a means to get the citizens of Union Bay to foot the bill for a SLAPP suit against a very vocal private citizen?

SLAPP stands for “Strategic Lawsuit Against Public Participation“, and laws forbidding towns from suing citizens have been on the books for a while now.  If you want to read an excellent treatise on SLAPP lawsuits, I would encourage you to read Vincent Pelletier’s excellent presentation.

As a former resident of Union Bay, I too have wondered, like Tio, why no one has instituted civil or criminal fraud charges against the three trustees who voted to use UBID funds..

Could it be because they don’t have deep pockets or access to a public purse?

Well, as I wrote in my last article, lawsuits are a lot more fun when someone else is footing the tab.

This report from Alex Jones, who gives some background before speaking directly with Jennifer Jones about the bizarre events going on in her town.

While Martial Law has not yet been invoked in Union Bay as it appears to have in Quartzsite, Arizona, I’m sure if Alan de Jersey had his way, it would.

He’s probably drooling with envy over the power Quartzsite officials have managed to steal for themselves.