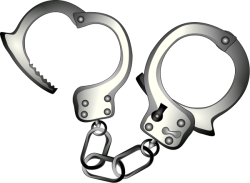 While this story is only coming to light now, back in July members of the Toronto Police Service inexplicably felt an overwhelming desire to handcuff a 9-year-old child with Asperger Syndrome.

The child, who has been diagnosed with a host of manufactured disorders such as ADHD and Oppositional Defiant Disorder (remember when kids used to be just kids, not walking, talking “disorders”?), day care staff called the cops when the kid got sick of being bullied and locked himself in another room.

Toronto Police Services Constable Victor Kwong said when officers arrived on the scene, they asked the boy to lay down on the floor on his stomach, and put him in handcuffs. He said the boy was only in handcuffs for about five minutes, after which he calmed down and was chatting with police about his hobbies.

“When he left, he hugged the officers and the nurse,” said Const. Kwong who stood by the officers’ decision to cuff the boy.

Uh… yeah, okay.  Call me crazy but I’m willing to bet there are at least one or two options that ought to be tried before we start handcuffing 9-year-old kids in daycare.

The Unspoken but Very Real Lesson

The unspoken lesson that was given to every kid in that daycare was not that “little Johnny” got what he had coming.

No, the unspoken lesson that every child took home from day care that day was:

“If I get out of line the cops will do that to me too.”

When they are willing to treat children like this, it should come as no big surprise that they’re willing to violate the Constitutional Rights of adults on such a routine basis across the nation.

The kid should not have been tossing furniture and anything else he could find around the room where he’d barricaded himself.  That being said, the root causes of this incident are NOT the gazillion “disorders” we’ve manufactured so we can drug our children into complacency.

No, the root cause is the lack of discipline of our children.

Yeah, I actually said that.  Out loud and everything.

Peter Frampton, the executive director of the Learning Enrichment Foundation, said those children should be in a smaller facility with at least one caregiver for every five children, rather than in a “standard childcare centre” which, in accordance with the Day Nurseries Act of Ontario, has one childcare worker for every 15 kids. The problem, according to Mr. Frampton, is funding. He said there needs to be “appropriate budgets in place to support delivery of these services to the people who need it.”

The problem is not so much a lack of government funding as it is that governments are intent on stealing well over half of what every working person earns in a year.  Perhaps if we would allow ourselves to kill off all the cradle-to-grave government programs, a parent could actually afford to say at home with their children instead of having no choice but to put them in daycare.

Yeah.  I’m actually in favour of killing all those government grants and programs the government has no business being involved with in the first place.

I said it out loud. Again.

I recently came across an essay by an 18-year-old, written about 12 years ago in the days following the Columbine Massacre.  Sarah Roney spelled out with such simplicity the problems our society faces today.

Pity nobody seems willing to listen.

We prefer drugging our children into a stupor because we can’t be bothered to discipline them properly.  For those who can be bothered, both parents are too busy working two jobs to pay for crap like Obama’s failed “stimulus package” to have time for our children.

You can download Sarah Roney’s amazing essay from Katey Montague’s website.  It’s on pages 2 of Katey’s Rights and Freedom Bulletin.

Then think about what Sarah said over 12 years ago and ask yourself one simple question:

Have we dealt with any of the issues Sarah raises in any meaningful way since that terrible day in Colorado 12 years ago?

Let me know your answer by leaving a comment below.