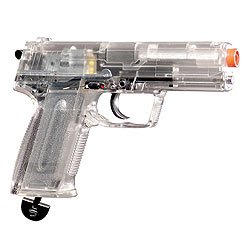 As the old saying goes, “Boys will be Boys”, and often that’s what we say when some kids make stupid but non-fatal mistakes.  Sometimes though, boys get themselves into hot water because they just don’t think things through.

That’s exactly the case in Campbell River, where three boys, ages 13, 15 and 16 were carrying their pellet guns down the road.

That in and of itself is not a crime.

Pellet guns are NOT illegal, and nor should they be.  They come from the manufacturer with a bright orange muzzle so it’s plain to everyone within sight that it’s just a toy.

But boys being what they are sometimes think they know best, as in the case of these three.  They painted the bright orange pieces black.  Still not a crime.  Just kinda of stupid in today’s world of teen angst mixed with school shootings…

The public doesn’t have the tolerance for boyhood fun and games like it did 20 or 30 years ago.

And that’s when these Campbell River boys found themselves in a LOT of hot water.

Police respond to what they believe is a “Man with a Gun” call.

Their adrenaline is racing when they respond.  They don’t know what they’ll find, other than the high possibility they could be facing a life-threatening situation in mere moments.

In this case, “respond accordingly” means the three youths are the subjects of a “high-risk takedown”, something that’s just not a lot of fun for the recipients OR the police.

“These toy guns look realistic to us as police officers, especially at night, and especially when the orange muzzles have been blackened out. We can’t tell the difference. And if we come across somebody who’s carrying a firearm like that, they are going to be challenged.”

While I’m a self-professed gun lover and despise when legal items are treated incorrectly, I find it difficult to find fault with how Campbell River RCMP handled this situation.

Were the kids guilty breaking the law?

Technically, no, they were not.  Pellet guns are perfectly legal in British Columbia, as they should be.

What these three boys were guilty of is gross stupidity.  Such stupidity could have cost them their lives.

Corporal Hallam went on to say,

“It’s nothing that I would ever wish on anyone, to be taken down, high-risk, at gunpoint. I mean it’s absolutely scary and it’s not something that anybody should have to go through but we need to let people know that we have to treat these toy guns as real unless we know otherwise.”

Hard to argue, even for avid firearm-lovers.

The three youths each now face charges of “weapon dangerous to public peace” as well as “possession of imitation firearms“, although my personal opinion is that  the second charge might be hard for prosecutors to make fly.

How can it be a crime to possess something you can buy at the Canadian Tire store just down the road?

Beats me, but Crown prosecutors will surely give it their best effort.