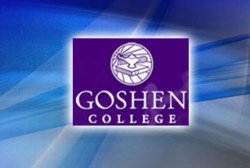 As bizarre as it sounds, Indiana’s Goshen College has banned the playing of the American National Anthem for being “too violent.”  Singing the words to the Anthem was banned a year ago, and now they have even banned playing the music.

“find an alternative to playing the National Anthem that fits with sports tradition, that honors country and that resonates with Goshen College’s core values and respects the views of diverse constituencies.”

Mennonites, a religious group of Dutch/German descent, that, in times of persecution, flees across continents and oceans to places of safe haven.

Once arriving in their new homes they live on the fringes of mainstream society not really being full participants. Here in Canada and the United States, making every opportunity available to avoid full societal participation, taxation and military service, but, conspicuously, availing themselves of every other benefit a free democracy has to offer.

In times of conflict Mennonites, quintessential cowards wrapped in cloaks of religious propriety, refuse to participate in military service even if the aggressors are standing on the doorsteps. They prefer instead for the sons and daughters of other citizens to sacrifice themselves. Remarkably, this refusal to defend their benefactor in time of need and conflict is graciously permitted by the same.

How offensive, how injurious then, for Goshen college to ban the national anthem of their host country, when the same has extended a hand of welcome and generosity to both them and tens of millions seeking refuge from tyrants, persecution, poverty and madness.

I think the time has arrived, nay, is long overdue, for the United States to start cleaning from its midst those who, with extended hands and an overwhelming sense of entitlement and expectation, smile and fill their pockets from the coffers of the America yet, at first opportunity, drive a dagger into her back.

From President Hussein Obama, enjoying and revelling in the company of the Muslim Brotherhood, whose actions, hence, are the very definition of the words treason and sedition, to the legions of muslims and islamists who seek, at every turn, to destroy the United States of America from within.

These enemies of America, who quietly walk its streets and avenues amongst patriotic citizenry, are growing in number exponentially. Treacherous men and women who are fully supported by socialist liberals and a socialist left wing mainstream media that is conspicuous by its manifest seething hatred of America and all she stands for.

Not to be ignored are the academia at universities and colleges across North America. Administrators and faculty who fully support and actively promote and cultivate, everything from treason to the facilitation of a renewed Holocaust. The board and faculty at Goshen College now has the distinction of being added to that list of those who whisper poisonous lies into the ears of our children.

How proud they must be.

The United States of America cannot suffer this repeated injury much longer. The time has come to look closely at our institutions of higher learning, both in the United States and Canada, and remove from the same, those who would destroy democracy and freedom under the guise of peace, diversity, enlightenment, empowerment and “tolerant inclusion”

Perhaps these men and women at Goshen College, finding life in the United States of America so injurious and unbearable, should pack their bags and move on.

Perhaps the good men and women of the town of Goshen and the State of Indiana can help them pack.

You can reach the folks at Goshen College using the information below.
James E. Brenneman, President
Email: [email protected]
Phone: (574) 535-7501

Please phone or write to them and express your displeasure with their decision to ban the American National Anthem from their campus.