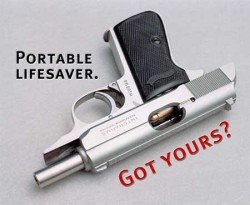 The editorial board of the Wisconsin Journal-Sentinel have their heads firmly planted up their rectums.  Their August 23rd editorial titled “Keep them out” shows how out of touch with reality they are.

Their case against law-abiding citizens opens with this asinine statement:

Before the Civil War, a Southern congressman once used a cane to beat a Northern senator to within an inch of his life on the Senate floor. But, although we haven’t done an extensive search of the records, we’re unaware of any gunplay that ever took place in those hallowed halls or similar halls of other legislative bodies.

They open with an odd historical fact that has absolutely nothing to do with firearms, and then openly admit they were too bloody lazy to actually do their research before writing this tripe.

They promote local bans on firearms in public places, citing “many” municipalities are considering them.

The Journal-Sentinel editorial writer(s) clearly despise any strong emotion, and would probably call the cops on me just for writing this response to there moronicity.  (Yes, that’s a word.  Jane and I agreed!)

…public debates sometimes get pretty heated. So do public hearings, some of which go on for hours and involve a lot of angry words. Granted, shootouts aren’t likely to break out, but allowing guns into the mix of heated politics and angry words still isn’t a good idea.

Folks like Ybarra and the Journal-Sentinel editorial writers clearly are afraid of their own shadows  and are therefore terrified of anyone who actually has strong emotions and a willingness to express them appropriately.

Just because I vigorously disagree with you and express that disagreement with gusto does NOT make me a killer-in-waiting.

While I may think you (Ybarra and the Journal-Sentinel editorial writers) are complete and utter morons (I do), that does not mean I want to kill you.  (I don’t.)

What I want to do is educate you about the folly of your ways.  Your intentions may be good, but the road to Hell is paved with them, in case you’ve forgotten that timeless maxim.

You idiots need to be reminded of a few simple facts.

1. all mass shootings have one thing in common.  Their victims were in “gun-free zones.”

2. the only person with a firearm was the criminal.  The law-abiding were prevented from having them, and were defenseless as a result.

3. mass shootings do NOT happen at shooting ranges, where everyone has a firearm.

4. anyone willing to subject themselves to a licensing and testing scheme to get a concealed firearms license is NOT someone you need to worry about.  Statistically, you are more likely to be shot by a police officer than you are by a concealed carry license holder.

I will never understand how disarming good people will miraculously make us safe from bad people.

Of course, the trouble with idiots like Paul YBarra and the Journal-Sentinel editorial writers is that they are not interested in the facts.  They want what they want, even if what they desire actually guarantees more shooting victims.  They certainly don’t want to try and explain how disarming the good protects us from the bad, presumably because even they comprehend that it doesn’t.

So let me ask these morons this one simple question:

What do you do when someone goes on a shooting rampage?

You call men and women with badges and guns.  You call the police.

The very best those men and women with their uniforms, badges and guns can do is arrive in time to draw pretty little chalk lines around the corpses of the bodies… the blood of which will lie at the feet of Paul Ybarra and the Journal-Sentinel editorial writers, if they get their way.

The trouble with the entire s-called debate over “gun control” is that emotion has won out over the facts.

We all want a safer society.  The difference is that people like me are willing to do what works, even if it flies in the face of what my emotions tell me.

People like Paul Ybarra and the Journal-Sentinel editorial writers won’t do anything that doesn’t make them feel better.  Facts? Who needs them!

Again, we’d vote for the ban. There’s a much better chance of recovery from a caning than from a shooting.

While that may be true, there is a far greater chance that Milwaukee’s next spree killer will have a lot more victims, since these idiots want to guarantee that the killer will be the only one present with a firearm.

But hey, they can feel good about themselves right up until all the blood flows, right?  At which point they do what they always do and blame all the firearm owners who didn’t do it.

It’s the American Way.  (Canadian too, lest those of us North of the 49th get too high on our moral horses!)