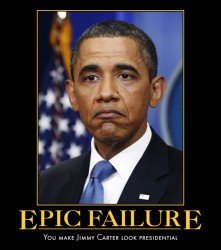 In a column titled “A disaster called Obama“, columnist Yigal Wait writes scathingly about the failure of “Mr. Hope and Change”, Barack Obama.

While his column tears strip after strip from the hide of the most useless President in American history, his last two lines are brilliant:

Bush is already a distant dream, while Obama is a living and breathing nightmare. Now all that’s left is to wait and see whether America’s citizens will be able to remove him from the White House before he destroys everything.

I urge you to read Yigal Wait’s entire column for a middle-eastern perspective on the man who seems intent upon destroying America from inside the White House.

I also came across this video the other day and thought it complimented Yigal’s commentary perfectly.

There’s really nothing I can say that this video doesn’t.  Enjoy!