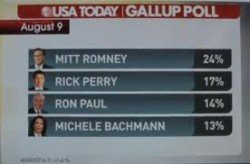 The race for the Republican presidential ticket is underway, but according to the main-stream media, or should I say the main stream MORONIC media, Ron Paul isn’t even running.

Watching the contortions they have to twist themselves into in order to avoid saying his name would be hilarious… if I wasn’t so incredibly disgusted by their lack of journalistic integrity.

Kind of like last election’s love affair with that guy from Chicago, whose credentials were and are laughable at best, yet nobody in the consensus media was willing to say anything  negative about Obama simply because he was black.

I don’t despise Obama because he’s black!  I despise him because he’s stupid and refuses to face the facts of what he’s doing to his own country, namely destroying it step by Marxist step.

Shining a little light on the subject of the media’s blatant bias when covering the Republican primaries is John Stewart.  I’m not a fan of his normally, but this time he absolutely nails it.

Watch and enjoy a little common sense… you know.. that thing that’s not so common amongst politicians or, as this video proves, reporters either.

Thanks to Jane Gaffin for sending this little gem my way…