Imagine, if you will, that you have a very bad day. You go home, punch your wife in the face 6 or 8 times while your children watch in horror, then you put a gun to your wife’s head and threaten to kill her.  Your children watch the whole terrible scene go down.

You are arrested and charged, and you plead guilty to assault and careless use of a firearm.

What sentence do you think you’d get for that?

If you’re a civilian, just for starters there would be a  lifetime firearms prohibition order against you.  You would then be spending the next 5 to 10 years behind bars.

But you’re NOT a civilian… you’re an RCMP Staff Sergeant.

You don’t go to prison. You don’t even get the firearms prohibition order.

The judge sends you home and basically says, “Don’t let it happen again.” 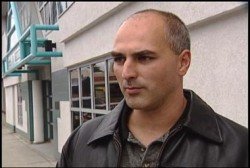 Staff Sergeant Owen Wlodarczak was handed a three-year conditional discharge after pleading guilty to charges of assault and careless use of a firearm.

It sure must be nice to receive such special treatment after terrorizing your entire family at gunpoint, yet that’s exactly the kind of special treatment Kelowna RCMP Staff Sergeant Owen Wlodarczak received on August 9th at the hands of Justice Vincent Hogan.

Am I the only one that finds it impossible to believe Justice Hogan would sentence us regular folk the same way?

Unfortunately, I was unable to find any rulings by Justice Vincent Hogan in the legal decision database CANLII.org.  Pity, because I would dearly love to know how he’s sentenced other violent offenders that have come before him.

It really annoys me when criminal conduct by police gets such special sentencing by judges.   Take away the badge, the gun and the uniform and suddenly there’s a whole different set of sentencing guidelines to be followed…

Justice Vincent Hogan said that Staff Sgt. Wlodarczak’s record as a good man was taken into account at sentencing.

“This is one of those situations where the circumstances are frightening and dangerous and generated by someone who should have known better…but we don’t ignore the credit ledger,” he said, referencing the good work done over Wlodarczak’s career.

Let me be perfectly clear.

I am NOT saying that Owen Wlodarczak is a bad man, or that he’s never done any good in his RCMP career.

What I am saying is that when a man comes that close to killing his family, he should be sentenced appropriately, and that means he be sentenced just like any other citizen would be in similar circumstances.

His estranged wife pleaded for the RCMP to make changes to how they deal with their members who are having a hard time dealing with the stress of the job.

With what he’s seen, and what he’s been through…they need to do more. They need to take into account what’s happening with their members.”

Officers who show signs of distress do have ample access to psychologists, psychiatrists and counsellors, but the woman said treatment needs to be mandated because her estranged husband wouldn’t have gone for help without being forced to do so.

The culture of the RCMP has been in desperate need of an overhaul for some time now, and this is one of those areas that needs to be dealt with. The current culture of macho-ism and bravado clearly prevents many RCMP members from getting the help they so desperately need.

The recent case of Kelowna RCMP Constable Geoff Mantler is a prime example of someone who has gone off the rails but hasn’t received help for his anger management issues.

The RCMP clearly has a problem that needs dealing with.

If that means forcing their members to attend counseling sessions and anger management treatment then that is exactly what they must do.

“I would never hurt anyone…I wish (my wife) and I had gone our separate ways two to three years ago and didn’t drag this drama on.”

We all suffer when our police men and women aren’t coping properly with the stress of their jobs.  When left untreated, stress-cases like this leads to many of the recent Charter rights violations by police.

I’m not upset that RCMP Staff Sergeant Owen Wlodarczak isn’t being sent to prison.  Clearly he needs some help and I sincerely hope and pray he gets it.  His entire family will be better off when he does.

What I’m upset at is the double-standard that judges have when it comes to sentencing police for violent crimes like this.

If it was you or me who had punched our wife in the face 8 times then held a loaded gun to her head, we wouldn’t be breathing free air for a long time, regardless of the contents of our credit ledger.

Justice Hogan did have two things to say that are worth noting.

To Owen Wlodarczak, he said,

“I hope what you said is sincere.”

To the people watching the court proceedings, he said,

“I hope all of you go back to your homes and try to be loving to each other.”

Words we all, police and civilians alike, would be wise to heed.