Thanks to my great friend Jane Gaffin for that awesome line… “Oak Park Garden Nazis.”  What else do you call the bureaucratic buffoon who threatens to send someone to prison for three months for the heinous crime of growing a vegetable garden on her own property?

Julie Bass is a homeowner in Oak Park, Michigan.  Her front yard was torn up by city workers when they were doing work on the city’s sewer system.  When the city’s work was finished, Julie Bass figured that was as good a time as any for a change.  Instead of replanting her front lawn, she decided to plant a vegetable garden instead.

That’s when the Oak Park Garden Nazi descended upon her with all the rage and fury only a bureaucrat can summon against a poor, unsuspecting citizen.

Kevin Rulkowski, aka The Oak Park Garden Nazi, despises anyone doing what they please on their own property.  His asinine belief is that you must first get his permission before doing anything on your own private property.

Rulkowski is nothing if not the epitome of bureaucratic arrogance run amok.

Filthy bureaucrats like Rulkowski have a single, overriding principle that guides their every action:

THE RULES ARE MORE IMPORTANT THAN PEOPLE

It doesn’t matter that the rules are as asinine as the bureaucrats who made them.  No, of course not.  The RULES are all-important, all-powerful, all-knowing… you know… like the pompous asses that passed them in the first place.  Pompous asses like Kevin Rulkowski.

Somewhere along the line, and I don’t know if it was The Oak Park Garden Nazi himself or some other moronic member of the bureaucracy, someone decided “there oughta be a law“… so they created one.

“All unpaved portions of the site shall be planted with grass, shrubbery or other suitable live plant material.”

Apparently a vegetable garden does not qualify as “suitable live plant material.”
Our beloved Chief Moron and Oak Park Garden Nazi Kevin Rulkowski was stupid enough to say the following to a reporter’s video camera:

“If you look in Webster’s dictionary, suitable means common. And you can look all throughout the entire city and you’ll never find a vegetable garden that consumes the entire front yard.”

This ridiculous statement caused my good friend Jane, who just happens to share my views on mindless bureaucrats like Rulkowski, to write the following to me in an email:

Well, I don’t know what Webster’s Dictionary says that he quoted “common” from, but Mac’s Dictionary [Jane owns a Mac laptop] defines “suitable” as:

right or appropriate for a particular person, purpose, or situation;

which pretty much fits Mrs. Bass’s purposes for growing organic vegetables in her front yard in neat raised boxes overflowing with beautiful green vines and foliage that serve an additional, underlying, nutritional purpose not met by flower greenery, except maybe fireweed whose leaves can be used as greens to accent stews…but I doubt that fireweed is “common” in Michigan.

As you can see by the image below, Julie Bass’s front yard is hardly an eyesore.  I wish she lived down the block from me so I could stop and munch on some vegetables with her as we discuss what to do about garden nazis in general, and Kevin Rulkowski in particular. 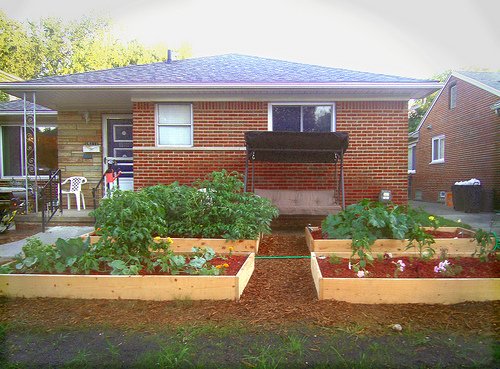 Mike Adams, aka the Health Ranger, said this on NaturalNews.com:

Well what could be more suitable to a family with a yard than teaching children how to grow some of their own food right at home?

That’s suitable! It’s the most suitable (and natural) thing in the world, in fact. What’s weird is to grow nothing but grass and then spray your lawn with toxic chemicals to kill all the weeds, and then mow the lawn every week burning up fossil fuels and polluting the air just to keep your lawn manicured. That’s bizarre (and terrible for city air quality, by the way).

I sure can’t disagree with Mike on that.  The roar of lawnmowers every weekend is pretty insane, not to mention annoying.

Which brings me back to mindless bureaucrats like Kevin Rulkowski… annoying… in case you missed the awesomeness of my segue!

Why is it the bureaucrats despise everything not under the complete control of their annoying little thumbs?

Kevin Rulkowski’s entry to the national stage is a result of his own stupidity.  By attempting to enforce a moronic statute on Julie Bass, he has exposed himself to the world for ridicule, such as I’m doing right now.

This petty moron actually threatened to send Julie Bass to jail for 93 days if she did not immediately remove her vegetable garden, which is what caused Julie’s story to go viral on the internet.

Having the light of the world stage and its resultant uproar on him caused the petty little tyrant wannabe to actually back down.

Isn’t the free sharing of information great!  If it wasn’t for the internet, most people would have never heard of the Oak Park Garden Nazi, and Julie Bass would be sitting in prison right this minute.

“Our attorney went into court this morning to file a motion. While he was there, someone told him the charge against the garden was dropped. Wow. Nobody called us. Nobody called our lawyer. This has got to be the strangest case of dropping charges I have ever heard of. so, they wouldn’t let him file his motion, and when they showed him the paperwork, it was signed by another judge, from another place, who we have never even heard of. Weird weird weird.”

It’s not all good news, however.

Yes, they dropped charges against Julie that would have sent her to jail for 93 days, but there’s a catch.  You see, by daring to stand up for herself; by refusing to submit to a mindless bureaucrat’s whim, Julie Bass has been charged with two misdemeanor crimes that, as coincidence would have it,  have nothing to do with her garden.

Now she’s liable for 180 days in jail because of the petty tyrants’ insatiable need to be “in the right.”

Quoting from another entry on her blog:

“On a dumber note, the city has decided to reinstate the case about our dog licenses. When they came over and saw we didn’t move the garden after their warning, they added a ‘no license’ charge for our 2 dogs. We went within the week to pay for licenses and even paid late fees, and when we came to court the prosecutor asked to see the documentation that it had been taken care of.

So, he wrote a few notes, it seemed like everything was taken care of, and when I was in front of the judge nothing was mentioned at all about the dogs. In fact, nothing has been mentioned since then about the dog licenses, with the exception of a few blog readers who noticed the dog charges on the ticket and asked me about it.

We thought the city just wanted the dogs to be vaccinated against rabies. Our vaccines for the dogs are now and have always been, current and up-to-date. We didn’t protest. We didn’t complain. We paid and we were done.

or so we thought…

So, the city still wants us to appear in court on the 26th of July. This time it will be for the dog licenses, which we have already taken care of. The dog charges are each a misdemeanor. So now we are up to misdemeanor x 2.

If you want more information about what’s going on in Oak Park, then I highly recommend you visit Julie Bass’s blog: OakParkHatesVeggies.

The petty tyrants and mindless bureaucrats despise the light being shone on their dirty deeds.  They prefer hiding in the shadows like cockroaches, where their stupid rules can reign supreme.

NaturalNews.com has done a great job on this case so far, including adding contact information for the Oak Park Garden Nazi on their website.

By all means, please send an email to him and to Oak Park City Manager Rick Fox, since it is Fox that needs to get his minion back in line.

Don’t forget the Oak Park Mayor Gerald E. Naftaly, either.  He needs to hear an earful about the stupidity of his employees as well.

Complain loudly to Kevin Rulkowski, the condescending bully city planner in the news video who is harassing Julie Bass over her garden and threatening her with punitive action for daring to question his “authority”:

Be sure to CC the City Manager Rick Fox who needs to be kept in the loop on this so he can see how his entire city is now becoming famous all across the ‘net for having the world’s most moronic city planner who hates vegetable gardens:

If you wish, you may also cc the Mayor of Oak Park, Gerald E. Naftaly:
Email: gnaftaly@att.net

If you write these folks, please let me know what response you get.  And hey, if you want, send them a copy of this article.  I did.
🙂