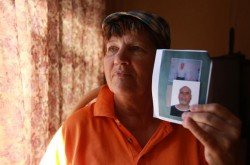 The Toronto Police Services need to be reformed! They have killed again. This time their victim was Charlie McGillivary, a mentally ill man who was going for a walk with his mom on August 7th, 2011.

“He was a boy trapped in a man’s body,” said his neighbour, Karlene Steer.

“He was a big man who loved pizza, ice cream and pop and that’s why his mom had him out for a walk –she wanted to help him lose some weight.”

“They said they were looking for two people and Charlie might have fit their description Might have? I said, ‘And you killed him for a might? A might?’” said Charlie’s mother, who witnessed the murder of her own son.

“When I asked them to not be so rough they told me to shut up. And when I wanted to go to the hospital to be with my son who had turned blue, they told me to take a cab.”

These thugs with uniforms, badges and guns have to be stopped.

I keep telling myself that they can’t hide behind a uniform and badge forever; that eventually the police brutality and misconduct will come to a stop; that all these tragic videos and reports of police killing innocent Canadians will have an effect of the Chiefs of Police and they will finally bring their forces back to obeying the Charter of Rights and Freedoms.

But so far… nothing.

How far must it go before people start cluing in to the obvious issue at hand? Our so-called protectors are killing us! Why do so many people still insist on defending them?

I think they’re scared to face the truth. The truth is a very scary fact to face, but with truth comes justice.

The people that pretend everything is fine aren’t fixing a thing. People will continue to die and our Rights and Freedoms will continue to be violated. It’s a serious serious issue that can’t be ignored forever.

Poor Charlie and his mother didn’t deserve what happened to them and no excuse the police can come up with will excuse their irrational actions.

A witness that saw the attack underway had this to say,

“What I saw was a large man fighting the cops. He was punching them and then one officer jumped him and took him face down to the ground. He went down hard right on his face.”

Charlie had the mental ability of a five year old. He was scared and confused. I can only assume he was trying to get away from the scary men that were trying to handcuff him. Such a concept would be confusing for a five year old. However I would think that before an officer decided to handcuff a man that “might look like a suspect” he would first say something to him and at that point a reasonable person would figure out that the man was mentally ill.

The fact that the arrest got so far out of hand leads me to believe that the officers didn’t act reasonably. Even after Charlie’s mother yelled at them to stop, pointing out that he was mentally ill and that he was turning blue and his eye’s were rolling back in his head, the constables continued on and told her to “shut up” and “back away”.

Their lack of intelligence to deal with the situation professionally and reasonably leaves me with one verdict: guilty of murder.

The Special Investigations Unit (SIU) is now in charge of getting to the bottom of this. The SIU is the civilian oversight for all Ontario police services. However I noticed that it’s composed of mainly ex-cops…. but wait… an ex-cop investigating a cop? Isn’t that a conflict of interest?

“The SIU has designated three subject officers and we are waiting to hear back from them about whether they will come in to be interviewed,” said the SIU’s Jasbir Brar.

Many people commented on Joe Warmington’s article about McGillivary’s tragic murder by police in the Toronto Sun. One poster by the name ‘J L‘ defended the police saying,

“The charter gives everyone the right to silence, including police. Maybe the officers should speak, maybe they shouldn’t, but the Chief can’t force them to do this.”

I hardly know what to say to that, it’s so stupid (for lack of a better word). If any of us ‘regular folk‘ killed a man, we wouldn’t have the option of whether or not we want to go in to the police station to be interviewed and questioned. It’s clear to me that the police have different standards when it comes to crimes committed by their own, and they’re above the law.

I can’t believe the blatant disregard for the Charter of Rights and Freedoms by the Toronto Police Services has continued this long.

I’m disgusted with Chief Blair and his disrespect for the families of those who have lost loved ones from police brutality.

It’s disgraceful that he’s not willing to force his men to be interviewed by the SIU. It’s as though he doesn’t care. A man with such power and authority must be held to a higher standard; a standard that holds the Charter of Rights and Freedoms first and foremost.

A Police Chief should be a respectable and respectful person, a man with morals and a conscience. Chief William Stirling Blair is none of these things.

If everyone helps out in some small way a difference may be made.

No one wants to be the one guy that takes the fall and risks everything such as my Dad with his Charter Challenge on the Firearms Act and we all saw how that turned out. The least we can do is write a letter to the authorities expressing our outrage and discontent with ‘our’ employees then maybe just maybe we will be heard.

I strongly urge you to write to Chief William Stirling Blair and lecture him on his complete and utter disregard for the Charter of Rights and Freedoms, the lives of the citizens of Toronto and his unwillingness to control his men.