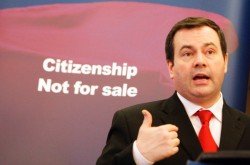 I say quietly because unless you followed the press releases on the Citizenship and Immigration Canada website, you’d likely never have heard about it.

Here’s a sample of what you can read in the press release:

The purpose of the consultations is to seek feedback on immigration levels, including the appropriate level of immigration for Canada, and the most suitable mix between economic, family class and protected persons.

In true government fashion, there is no actual link to a survey for Canadians to actually use to provide their feedback.

A search through ConsultingCanadians.gc.ca,which the press release points us to also comes up empty.  There’s a lot of surveys there if you’re willing to wade through the listings, but none about immigration.

It wasn’t until the good kitty over at Blazing Cat Fur sent a message directly to Minister Kenney that a link to actually sign up to be included in the consultations was forthcoming.

If you have concerns or thoughts about our current immigration policies, then I would urge you to sign up to be notified when these consultations will actually begin.