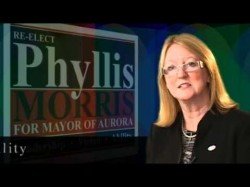 Phyllis Morris has gained a lot of notoriety since she lost her re-election bid to keep her job as mayor of Aurora, Ontario.  It was during that election that she got just a little too big for her own britches and started suing anyone and everyone who was related to a couple of blog posts she didn’t like.

She even went after the people she claimed should have deleted the anonymous posts that offended her, Richard Johnson, Bill Hogg and Elizabeth Bishenden, suing them for 6 million dollars.

Darn! I almost forgot to mention, she even named Automattic Inc., the company that gave the world the WordPress blogging platform, in her lawsuit too.  Clearly Phyllis Morris was out to grab a big payday.  Either that or she’s just lost her bloody mind, which is not that difficult a conclusion to come to;  suing the company that created a software program because you don’t like how someone uses that software program is [allegedly] absurd, retarded, moronic, stupid, asinine, pathetic, childish… (Did I miss any other suitable adjectives?)

But the [alleged] lunatic Phyllis Morris isn’t letting it go, either, despite the fact she lost her bid to have the anonymous bloggers’ names revealed so she could go after them too. As she threatened to do, she is appealing the decision of Justice Carole Brown, who tossed Morris’ absurd case out of court.  It was the right thing to do.

“The public interest favouring disclosure [of the bloggers’ names] clearly does not outweigh the legitimate interests in freedom of expression and the right to privacy of the persons sought to be identified,” Judge Brown wrote, noting the three anonymous defendants, who chose to make comments on the site using pseudonyms, had “a reasonable expectation of anonymity.”

Morris can’t even say what it was that so offender her, but her righteous indignation isn’t going to let anything stop her from abusing the justice system as she seeks to have those offensive anonymous bloggers “brought to justice.”

Phyllis Morris fails to comprehend one critical thing.  Okay, she fails to comprehend a LOT of things, but the one that I’m most appalled by is her utter failure to comprehend that as a political person running for elected office, she is a target for people’s wrath, justified or not.  From what I’ve gathered digging into this case, she deserved the trouncing she took in the municipal election because she’d failed at the job the first time around.

People will write on their blogs about political and public figures.  It is our Right to Freedom of Speech that guarantees this will happen, even when simpering cowards like Phyllis Morris don’t like it.

Ms. Morris, if you can’t take a little harsh criticism during an election campaign, if your feelings are hurt so easily, why are you running for public office in the first place?

Anyone running for public office is placing their actions before the people and those people have every right to speak their minds about both the person and their actions.  Deal with it.

Stripping people of their Right to Freedom of Speech is what tyrants do, not honest politicians.  Tyrants are the only ones who are terrified by free people speaking about those who, like a mayor for example, can have tremendous impact on the lives of their entire community.

Is Phyllis Morris a “tyrant in waiting?”   Her actions would suggest the most likely answer to that question is an affirmative one.

Politicians sue citizens for one reason and one reason only: to silence them and their political views.  In legal parlance that’s called a SLAPP, or Strategic Lawsuit Against Public Participation, and it’s been gaining popularity in recent years despite court rulings that the process is illegal.

In suing anyone and everyone connected to a few anonymous comments on a community blog, Phyllis Morris is proving that old adage most of us learned as a child is true:

Better to keep your mouth shut and be thought a fool, than to open your mouth and remove all doubt.

Phyllis Morris has removed all doubt that she is a fool, and she is the worst kind of fool: a pride-filled one.  Despite losing the election by a landslide, she’s stubbornly sticking to the story that these three anonymous blog comments subjected her to “ridicule, hatred and contempt.”

I would suggest it was her own record as mayor that did that.  From what I gather the blog comments only pointed that out to folks.

Morris absolutely cannot let this go.  All she is accomplishing now is ruining any possible reputation she might have once had in her political career.  She has no reputation worth having now, if the writings of columnists and bloggers across the nation are anything to go by.

You’d think that when the whole world says she’s out of step that Phyllis Morris might actually figure out that simple, oh so simple truth:

It’s not the whole world that’s out of step.