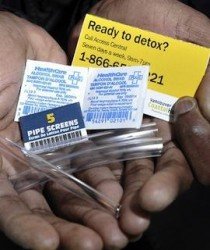 Gotta love the thinking process of Vancouver health bureaucrats… or maybe it’s the lack of a thinking process that’s to be loved.  Instead of actually trying to get people off crack, they’re going to hand them crack pipes to help slow down the spread of Hepatitis C.

Isn’t that sort of like handing the folks on the lower decks of the Titanic hand pumps to stop the ship from sinking?

Call be naive if you must, but the best way to stop Hep C from spreading through the crack smoking community is to cut down on the number of crack smokers.  Handing them crack pipes just seems… well… stupid.  Do these people really believe they can get a crack addict to stop smoking crack by handing them pipes and condoms?

And you want to call me naive?

The crack pipe program has a good precedent set before it, of course.  We’ve been handing out clean needles to heroin addicts for quite a while now.  Hasn’t stopped the spread of aids through dirty needles, but it sure makes the do-gooders feel great about themselves and what “progressive thinkers” they are, doesn’t it?

There is a solution to the problems drug addicts face.  Pretty much all of them can be solved by getting them into detox and getting them off the drugs that are ruining their lives and killing them.

But there’s no “feel-good” press releases in adding more rehab spaces, is there?

What I found hilarious about the announcement, as reported in the Vancouver Sun, was this:

A kit with a clean, unused pipe, mouthpiece, filter and condoms will be handed out to the participants, Dr. Reka Gustafson, a medical officer with the Vancouver Coastal Health Authority said.

Apparently the good Doctor Gustafson hasn’t spent a lot of time around some of Vancouver’s worst addicts.  If she had, she’d know that addicts aren’t particularly interested in whether or not their crack pipe is clean, or if they have a clean mouthpiece for it or not.  Their primary interest, just like any addict, is to get their fix.  Period.

A clean crack pipe? Sure, that’s great for about the first five minutes.

I seriously have to wonder about what the Vancouver Police Department (VPD) thinks about $50,000 worth of crack pipes Dr. Gustafson plans on handing out.

Last time I spoke with VPD constables about crack pipes, they were not at all interested in having them on the street, free or otherwise.  I was working on a movie a while back, and the script called for a junkie and a crack pipe, so I went down to Granville Street in search of what might pass for the real deal.  While I was there I stopped in to the VPD community policing center, explained who I was, what I was doing and asked for their advice on where I could get something that would work for the movie.

They were none to pleased to hear that the store kitty-corner to their community policing office was happy to sell me what the store owner called crack pipes.

They cursed, said they’d threatened to shut him down three times already and were now going to do it.  They were sick and tired of all the crack addicts in the area and the businesses that were all too happy to cater to their addiction.

Maybe I can send those fine Vancouver Police Department constables over to “visit” Dr. Gustafson, but not until I have a video camera and a good microphone.

That will be a meeting well worth recording!