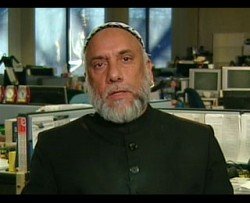 I would have thought that after receiving the legal bitch-slap of the century at the hands of Ezra Levant and then being turned loose to be laughed at and mocked by every Canadian from Vancouver to Halifax, including his own congregation of about a dozen souls, would have been enough to take the hot air out of this vicious little islamic balloon…….but I was wrong.

It seems that the sting of a public ass-whipping has worn off and the permanently offended, overly litigious, pious and thin skinned little worm, Syed Soharwardy, now seeks, once again, the light of day as an”authority” on all things islamic.

Syed B. Soharwardy has grabbed the limelight as the “go to guy” for islamo-info……..problem is that he is still having a little difficulty with “inflation-itis“…..(and I’m not talking about his ego yet)……..now, according to “Syed B’s Stats”, the population figures for muslims living in the Calgary area have tripled in less than 5 years……wow!!!……Is it just me or is there anything to be gained by falsely claiming that the Calgary’s population is 15 % muslim…..as opposed to the reality of about 3%…………hmmmmm?????

Mr. Sean Meyers of the Calgary Herald, and not one to break with precedent, couldn’t be bothered to do a little fact checking:

Of course we can chalk this inaccuracy up to a case of being star struck…… simply a small matter of the reporter, Sean Meyers, being slightly addled at having just brushed shoulders with greatness. Mr. Meyers actually spoke with the “leader” of the Islamic “Supreme” Council of Canada……wow!!!!…..

Going out on a limb here folks, but does Meyers actually verify the authenticity or depth of anything before he publishes it?? Never mind a little matter of the source’s credibility…….well, I suppose not….much like the “security experts” at the CBC who trotted out this vicious little gem……. “The Jewish Defence League is a banned terrorist organisation in Canada“…..this was a malicious lie for which CBC offered one little apology in a time slot that was the equivalent of being placed, at 2 a.m, between segments of “Jo-Jo’s Psychic Hotline” and Ron Popiel’s “Spray on Hair”

It seems buffoonery is a bulk item amongst mainstream media these days, to wit: journalistic hackery goes hand in hand at the Calgary Herald as cub reporter, the plucky little news hound, Laura “Lois Lane” Stone, fresh off the “lost dog, cat in a tree” beat, was, in response to the massacre in Norway, plumbing the depths of muslim fear and loathing in Canada……..

Ms. Stone, the very model of professionalism and neutrality…….in her search for the truth…….went to the Hamas and terrorist linked CAIR-CAN for opinions……and then swung around to the headquarters of the “Supreme Islamic Something Rather” for a chat with its “Supreme Leader”, Syed B Soharwardy……..actually I’m surprised old Syed (forgive my filthy infidelistic blasphemy) even has time to speak to reporters these days…..considering he’s fighting off wave after wave of “Hate Crimes” and “Islamo-Intolerance”………

By the way……on a side note…..how exactly does one set one’s self up as the “Supreme Leader” of a supreme anything????

I am told that, to the horror of the cat and several caged rodenti, I stripped naked and paraded about my livingroom proclaiming myself as “King of the Supreme Universal Council.”

Apparently I also added several titles like “King of Europe”, “Supreme Leader of The Morally Loose” and “Prince of Perverse Pomposity”……….etc, etc, etc……of course the next morning, once my love affair with the brandy was over, I was back to normal, no longer the “King” of anything and the pets were well on their way to recovery………….but being a muslim, a non drinker…..what the hell is Soharwardy’s excuse????…………I imagine he took copies of these wretched revelations, the Myers/Stone hack-jobs, and passed them amongst his flock….thereby reinstating himself as Calgary’s “Supreme Islamic Leader”……..(Yuh see kids…..that’s me in da newspaper!!)

It’s the equivalent of seeking out the advice of Karla Homolka and Paul Bernardo in setting up a teen drop-in center………or nominating Clifford Olson as president of the Boy Scouts……..in other words, its business as usual at the Calgary Herald and the CBC

Wrapping up………it seems as though media has decided to take sides…..while the two examples above are relatively insignificant on their own….taken in context with the mainstream media’s support and promotion of terrorism they are two more nails in the coffin of media’s impartial pursuit of the truth………this grotesque and disfigured state of media, on a global scale, is the handmaiden to islamic fascism and all its charming little pursuits…..

PS…….Dear Laura and Sean…….here’s an idea for a real story (not your version of real but the really, really, for real kinda real story….), why don’t you ask Syed Soharwardy why members of his congregation who oppose him mysteriously find themselves the subject of a horrific beating or have their homes suddenly burst into flames………….when you find time of course……