There are days that our [alleged] justice system makes me want to puke. Today is one of those days. In a ruling that baffles my brain, Ontario Superior Court Justice Heidi Polowin ruled that despite being “ganged up on” and threatened by police and a Children’s Aid Society worker that they would take away her one-year-old son, the resulting illegal search, called a “significant” breach of her Charter Rights, was still okay. 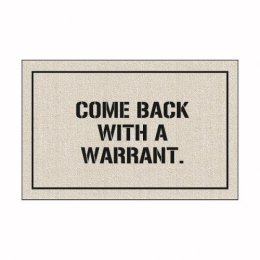 Justice Polowin decided that the police hadn’t intended to illegally search for a firearm when they went to the woman’s home.

The woman refused to allow them to search her home, presumably until they got a search warrant. For that she was threatened and coerced into choosing between allowing police to search her home or lose her child.

What kind of choice is that?

More to the point, what kind of jerk cops stoop to such disgusting tactics as this, simply because they are apparently too lazy (?) to get a search warrant?

Turns out the woman in question had stashed a sawed-off shotgun [allegedly] belonging to her boyfriend in a closet.

To quote the Ottawa Citizen:

The violation of the women’s rights, while serious, wasn’t “egregious behaviour” on the part of the officer, who felt “duty-bound” to conduct the search, the judge found. The gun and three rounds of ammunition found in the closet were reliable evidence and critical to the Crown case, and without it the prosecution would fail, said Polowin.

Then the Crown’s case should have failed. Period.

There were three of them against a single woman. Do you seriously expect me to believe these police constables didn’t have the situation under control?

Were things “evolving” so quickly they couldn’t control the location and get a search warrant?

Or were they simply having too much fun watching this poor woman squirm under the weight of an impossible decision after they threatened to take her child away?

What the police didn’t know at the time was that the entire fiasco was being recorded. The woman asked if she could refuse the search. Their response?

“Either you are going to let them look around or I’m not sure your little one can stay,” Shaw told the woman, who became increasingly agitated and nervous.

“Doesn’t there have to be some court order? Am I not right?,” asked the mother.

“If we were here unlawfully, we wouldn’t be here, OK,” said Const. Scott Kendall, one of the officers. “This isn’t my first day on the job.”

A half-hour passed before the mother eventually consented to the search after talking to her father on the phone because he “knew the rules.” She was never told she could call a lawyer or advised of the risks she faced by allowing the search, the judge said.

“The entire atmosphere in that apartment would have been oppressive and intimidating to (the woman),” said Polowin.

“It was three persons in authority against one,” said the judge.

“The longer they were there, the more pressure was put on her,” said Polowin.

“(The woman) was faced with the most devastating choice a young mother would have to face — let us search or we’ll take your baby. That is no choice at all,” Polowin found. “It gives the court much concern a person’s Charter rights would be pitted against their parental rights in such a manner,” the judge later added.

Sounds to me like the Ottawa Police needs to give their constables a refresher course in the Canadian Charter of Rights and Freedoms… and while they’re at it, maybe they can give that same refresher course to Ontario Superior Court Justice Heidi Polowin.

She clearly needs it.

But she’s the judge, so she can decide anything she wants.  That’s the way our system works.  Some days the Canadian Charter of Rights and Freedoms isn’t worth the paper it’s printed on.

I hope this woman appeals her inevitable conviction and gets this horrible decision overturned.