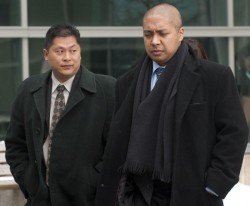 A couple of weeks ago I wrote about two Toronto Police Services constables, Edward Ing and John Cruz, who were convicted of brutally assaulting a 60-year-old disabled man, Richard Moore.

Despite that conviction and the judge’s disgust with them both for lying in court, neither cop was sent to prison.

Instead they were sent home and told not to do it again.  Ouch!

The judge, in his ruling sending the two thugs home (along with a 10-year firearms prohibition each) , said:

“Every police officer I have tried in the last two decades has been accused of using unwarranted violence in response to disrespectful speech.”

Despite that fact, the judge refused to send these two to jail.  His reasoning, in my opinion, was dubious at best:

“Jail is a particularly dangerous place for police officers,” Justice J.E. Allen said. “The potential to encounter someone they previously arrested, or someone who simply hates the police, is high. The ability of the jailers to protect anyone from violence in the current climate of overcrowding and understaffing is dubious.”

“Jail is a particularly dangerous place” for everyone, inmate and guard alike.  I’ve got friends who work in the prison system.  It’s no walk in the park.

Naturally, because they have badges to go with their guns, these two thugs don’t think they did anything wrong. To Constable Edward Ing and Constable John Cruz beating the crap out of someone so badly he’s got to go to the hospital for treatment is just “part of the job.”

Ing and Cruz are appealing their assault convictions, but given the wording of the ruling by Justice J.E. Allen I can’t imagine what grounds they think they have to appeal.

But that’s not the most outrageous part of this entire case.

The pair of convicted thugs are now asking for a court injunction to temporarily lift their 10-year firearm prohibition orders.

You see, despite being convicted of assault, both men are still on the payroll of the Toronto Police Service.

Obviously, being convicted of brutally beating up disabled people isn’t enough to get you turfed from the Toronto Police Service.  After all the civil rights violations and beatings handed out during last year’s G20 Summit, I guess this shouldn’t surprise me, but it does.

I’m one of those old-fashioned people who believe that our police men and women should actually have integrity and morals.  A slow temper never hurts either.

These two appear to have none of these qualities, at least if their actions and conviction in a court of law are anything to go by.

The headline in the Toronto Star was perfect. “Convicted Cops Want to Carry Guns“.

They were in court yesterday, July 13th, 2011 asking for Justice Maureen Forestell to remove their firearm prohibition orders so they can get back to work.  She said she will make her decision today, July 14th.  I’ll let you know what comes of this as soon as I find out.

Currently both men have been suspended without pay.  They should have been fired.  Why they haven’t is a question for Toronto Police Services Chief Bill Blair.  Good luck getting an answer out of him.  He won’t respond to me.