Some days it doesn’t take much.  Just one good-looking woman, a pirate’s wench costume, a shotgun and a camera or two and a guy can have a really great day.

A friend of mine was passing through town this weekend and she needed a break from her two kids, if only for a few hours.  I was going to take her to the range, but it’s closed for the youth camp this week.  So much for handgun shooting.

The next best thing seemed to be my pump action magazine-fed shotgun, a hundred or so shotgun 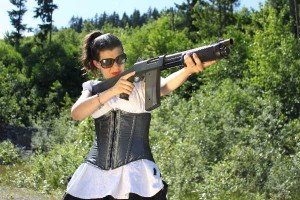 shells (movie blanks left over from a show) and a little dress-up on her part, then a drive out to the hills where we wouldn’t be disturbed for a few hours.

We left the kids with my wife.  Don’t worry, she loves those kids and was glad to get the time with them.  No, really!

As you’ll see by the photos, we had a really good time, and Brandi had an absolute blast.  (pun intended!)

Our first stop was a lovely spot in the heavily-wooded valley where the sun was beaming down through the trees, lighting up the moss and undergrowth.  We found a nice spot close to the road with some decent lighting, added a few bounce boards and had some fun with the stills camera.

Brandi threatened me with bodily harm if she fell, of course.  I guess I can’t blame her.  Stiletto heels in the woods?  Looks great, but not exactly the right footwear for the deer trails.  I simply accepted the threat in stride and carried on.

Here are a couple of samples from that first photo shoot. 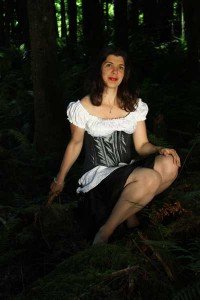 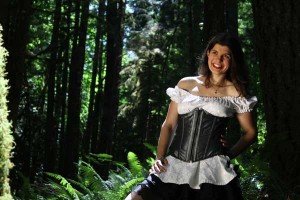 Then we moved on down the road.  There’s a lovely river near here and in some spots you can drive right to the edge and have water lapping at your tires… at least at this time of the year.

It was a beautiful spot and we spent quite a bit of time there, after, of course, more threats of bodily harm from Brandi if she fell into the river… 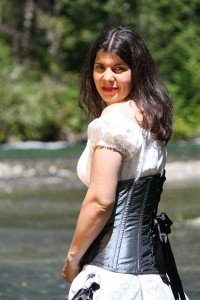 I just smiled, handed her the shotgun and told her to go stand on that rock at the edge of the river.  Everything seemed to get better after I handed her that shotgun. 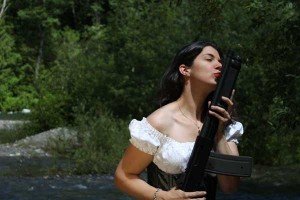 Brandi got a little carried away with the shotgun, as you can see from these photos.

Apparently she’s found a replacement for Jake, her husband. I was going to email the photos to Jake, but I figured he’d get a little pissed at being replaced by a 12-gauge shotgun!  So I posted them here instead!  (He never reads my blog… good thing too!) 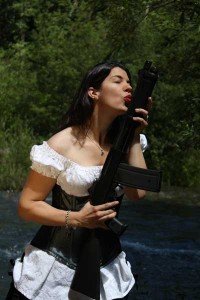 Then we wandered down the road some more and managed to scare some tourists visiting from America.  They were up for the weekend, I guess, and were one camping spot over and out of sight from where we were doing our little video shoot… you know… mockup of zombie killing or something like that.  Brandi has her demons…

I just rolled the cameras and had some fun as she blasted off half a dozen blanks.

That’s when we realized someone else was nearby… they sounded an air horn.  We couldn’t stop laughing!  You’d think they’d have said something after the first shotgun blast… but not a peep the entire time we were there.

If I decide to post the video of the sexy vixen and her shotgun on the zombie’s trail, you’ll find it embedded here later this week.  I’ve got to edit the pieces together first.

Then we figured we’d give the poor tourists a break.  So up these old logging roads we went, and Brandi just kept asking me if it was safe to take my truck up roads like this.  She and her husband didn’t even take their quads places like we drove.

I just laughed.  They’re from the city.

You need to cut those city folks some slack from time to time.  At least Brandi and her husband were trying!

Anyway, up the top of the mountain we went, passing a couple of folks on quads coming down the road.  The first quad had an older gentleman on it.  It was a narrow old road, so I pulled over as far as I thought I could without dropping us down the mountain, then waved him to go past us.  He just kept staring at Brandi, who was all decked out in her pirate’s wench outfit, complete with bright red lipstick!

The look on this old guy’s face was absolutely hysterical!  He couldn’t take his eyes off her!  Can’t really blame him.  Brandi’s pretty hot even when she’s NOT all dolled up.

Getting to the top of the mountain was well worthwhile though, because I got this great shot of her with the mountains in the background. 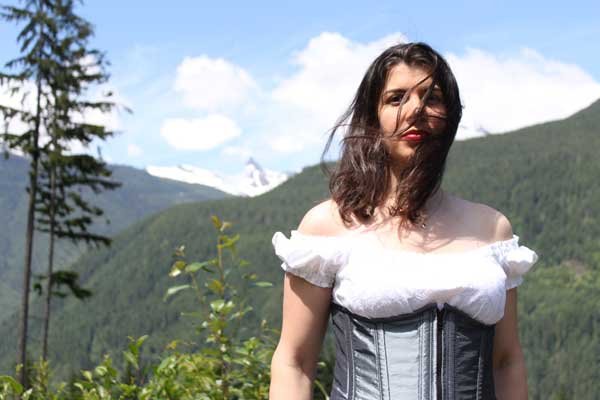 After that we made our way back down the mountain and headed for an old gravel quarry to let Brandi blast off the shotgun while standing on some solid ground.  I figured she deserved it after wandering through the woods and practically falling into the river.

I got a great couple of shots of her shooting the shotgun.  This is one of my favourite shots from the day. 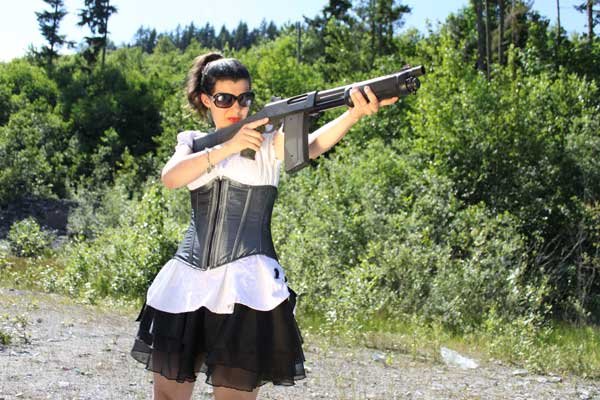 We also shot some video of her shooting the shotgun.  That was fun.  I’ll also post this here later as soon as I get the footage pulled off the camera and uploaded to YouTube.

I gotta say… there’s nothing quite like a hot Brunette Wench and a 12-gauge shotgun on a hot, sunny day.

Damn shame I had to waste my Saturday like this, isn’t it?