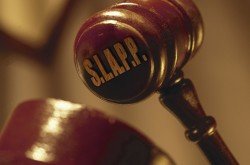 Freedom of Speech means the freedom to criticize government, ALL levels of government, without fear of being sued into oblivion.  Governments, of course, can’t stand most criticism, and the small government of the Union Bay Improvement District (UBID) is no exception.

This merry little band of morons decided that the solution to one of their ratepayers expressing her displeasure with the District government was to sue her for defamation.  This is what we call a Strategic Lawsuit Against Public Participation, or SLAPP as they are more commonly called.

The whole point of a SLAPP lawsuit is to silence critics of government or corporations by forcing them to defend massive lawsuits. It’s tough to criticize government when your life savings is now being spent on a lawsuit, right?

In the case of Mary Reynolds, a 60-year-old blogger who resides in the District, it meant defending herself against a lawsuit filed by the District in their efforts to stop her from criticizing their actions.

Unfortunately for the Union Bay Improvement District, lawsuits like this are against the law.  In 2009 B.C. Supreme Court Justice Nicole Garson wrote in her ruling in Dixon v. Powell River (City), 2009 BCSC 406:

“It is antithetical to the notion of freedom of speech and a citizen’s right to criticize his or her government concerning its governing functions that such criticism should be chilled by the threat of a suit in defamation.”

Sounds pretty straight-forward to me, but obviously the boneheads running the Union Bay Improvement District got some pretty lousy legal advice.  Either that or they ignored some very good legal advice and sued Mary Reynolds anyway.

The whole point of Justice Garson’s ruling was to make it exceedingly clear to governments that threatening citizens with lawsuits simply because those citizens have spoken out against said governments is not going to happen.

One of the tactics the morons of the UBID did was to cut off her water.  Guess they were trying to teach her a lesson… shut up or you get no water.

Bad move, and not just from a PR standpoint.   If Mary was so determined to speak out about the District’s asinine plans BEFORE they cut her water off, did they really think that sort of move was going to work in their favour?

Apparently those folks just ain’t too bright.   Mary Reynolds wasn’t about to shut up, water or no water.

Not only did the UBID sue Mary Reynolds, they ran up a legal tab of over $90,000 doing it.

To quote the Vancouver Sun article on the case:

In a blatant attempt to curtail free speech, district trustees hired a Vancouver lawyer who ignored the well-known B.C. Supreme Court authority in starting the action in November against the blogger’s stinging criticisms.

In an area that has an average annual after-tax income of just over $21,000, landowners were justifiably upset that their local government was running up a 6-figure legal bill just to shut up one outspoken senior citizen.

They have since turfed some of the trustees and demanded that the remaining ones extricate themselves from the lawsuit.

They finally did, and the case has now been “resolved” with the newly elected District board settling with Mary Reynolds.  They’ve agreed to pay her $15,000 for the mistakes of their predecessors.

Carol Molstad, the new chairwoman of the District said,

“On the advice of our lawyers, the [precedent-setting] Dixon v Powell River case indicates that [Union Bay] likely did not have the right to bring a suit in defamation against one of its ratepayers and [it] determined to withdraw its claim.

The community also gave the trustees clear direction at its annual general meeting to extricate itself from this action and ‘stop the bleeding.’ This applies a strong tourniquet.”

I should hope so.

But that’s the thing about governments and bureaucrats though, isn’t it? When it’s not their personal money at state, they’re all too willing to spend whatever it takes to get what they want; in this case the silence of an outspoken advocate of their ever-growing stupidity.

Mary Reynolds has, to quote the Vancouver Sun article again, “offered to let bygones be bygones if they reimburse the district for its legal fees.”

The implication I take from that statement is that Mary Reynolds might just be willing to sue the idiots involved if they refuse to repay the district.

Now wouldn’t that be a fun case to watch in court?