I will not be naming the piece of crap who murdered Deputy Kyle Pagerly. I don’t believe I should. Jackasses like Pagerly’s murderer don’t deserve to be remembered. Decent young men like Kyle Pagerly, on the other hand, most definitely do.

Deputy Kyle Pagerly is a veteran of the Iraq war. He served his country honourably, and when he returned, he joined the Berks County Sheriffs Department. He was 25 years old when some pathetic piece of crap decided that shooting him in the head was the right thing to do.

There is nothing, in my opinion, so pathetic and useless as a coward who wants to die but can’t do the deed himself. Those particular cowards inevitably decide that Suicide By Cop is the solution. 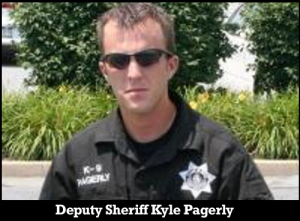 I swear I will never understand why it’s easier to shoot a Deputy in the head than it is themselves. It would sure save the rest of us a lot of grief if they’d just leave the rest of us out of it, especially the poor family!

My heart goes out to the family of Deputy Kyle Pagerly. He deserved so much better than to die at the hands of a coward like this.

The coward who murdered Deputy Pagerly was being sought by police because he’d already endangered the lives of his own family in the days prior. His father claims he had mental issues, but apparently wouldn’t get treatment for them. Just the day before he murdered Deputy Pagerly, this jerk told his father he was going to commit Suicide By Cop.

The only upside is that the piece of garbage was actually killed shortly afterward, saving the Pagerly family the agony of a trial, and the taxpayers the expense of keeping him alive for 20 years until his state-sponsored execution finally took place.

For that I am grateful.

Anyone familiar with my writing knows I don’t like corrupt cops. I despise them.

Deputy Kyle Pagerly was not one of those kinds of cops.

How come, whenever some asshole wants to commit Suicide By Cop, it’s never one of these corrupt cops that gets killed? How come it’s always some decent guy who is just doing his job like he ought to?

By all accounts I’ve been able to find, Deputy Kyle Pagerly was one of those decent guys. The kind of guy you’d be proud to call “friend”.

My prayers and condolences go out to Deputy Sheriff Kyle Pagerly’s family and friends in this terrible time of loss.

The Berks Country Sheriff’s Department website lists the following information about Deputy Pagerly, which I’ve modified from their point form to make a little more readable:

Deputy Sheriff Kyle Pagerly was born in Reading, PA, where he graduated from Wilson High School in 2001. He graduated from the United States Army Military Police Academy in 2001, and served in Kosovo in 2002, then in Iraq in 2003 – 2004 where he attained the rank of Sergeant.

He came home and graduated from the Reading Police Academy in 2005, passed the Federal Bureau of Prisons Basic course in 2006, and joined the Berks County Sheriffs Department that same year.

Pagerly graduated from the Philadelphia Police Canine Academy in 2009, along with his partner K-9 Jynx.

He was a Lieutenant in the Township of Spring Fire Department, where he served his community.