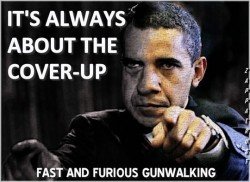 The Washington Post is blaming the National Rifle Association (NRA) for the Bureau of Alcohol, Tobacco and Firearms (ATF) many failures, including the massive bungle that led to the death of US Border Patrol Agent Brian Terry in their failed “Operation Fast and Furious.”

Yeah, that makes sense.  The NRA forced the ATF into selling all those guns to Mexican drug cartels.  It was the NRA that made the ATF sell guns to the men who murdered US Border Patrol Agent Brian Terry.

Only the Washington Post could be so completely out of touch with reality.

Those poor, downtrodden ATF agents just don’t have the understanding of the NRA or the American people.  Or so the blathering idiots of the Post’s Editorial Board say.

…the National Rifle Association and far too many lawmakers have fought against virtually every proposal to empower the bureau to better track and crack down on illegal firearms. They have won reductions in the ATF’s already meager budget.

Yes, that “meagre budget of 1.12 TRILLION dollars annually that the ATF suffers with.  I just don’t know how those poor ATF agents manage!

I guess that piddling $1.12 trillion didn’t leave them enough money to track all those guns being sold into Mexico’s drug world. I’m not sure how else to explain how they managed to lose track of over 2,500 firearms so easily.

Blame it on the NRA!

The real kicker to the Post editorial is that they actually have the gall to use the ATF’s massive public failures as a call for MORE power to be given to those morons.

The Justice Department’s Office of Inspector General and Congress are investigating, understandably. The probes could help to explain what went wrong and what could or should have been done differently. But Capitol Hill’s intense interest in the ATF should not stop there.

Lawmakers should give the ATF the tools it needs to fight illegal gun trafficking. They should enact stronger penalties for straw purchases and craft a federal gun-smuggling statute; close the gun-show loophole, which allows buyers under certain circumstances to purchase weapons without a background check; resuscitate the ban on assault weapons; and give the ATF the authority to collect data on multiple sales of long guns in border states.

Whatever those guys over at the Washington Post are smoking… they ought to package it and sell it.  That’s gotta be some really good stuff!