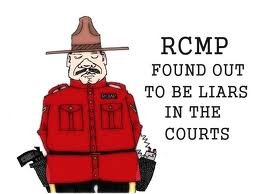 These four men took all of about 15 seconds before killing Dziekanski and then refusing him medical aid until it was too late.

At the time of the killing these men lied, only to have their lies refuted by video evidence filmed by one of the bystanders in the airport at the time.

That video was immediately seized, and it wasn’t until the rightful owner of that video threatened to sue the RCMP that the video was returned.

It was then released on YouTube and the whole world watched in horror as these trained policemen killed a man in under two minutes.

While many believe these four are getting away with murder (me included), for at least one of this foursome, it’s not the last time he’s gotten away with killing someone.

RCMP Corporal Monty Robinson, about a year after he took part in killing Robert Dziekanski, decided to have a few too many and then drive home.

Immediately after the crash that caused Hutchinson’s death, Robinson fled the accident scene and went home, where he continued to drink some more.

It’s a common practice for those “in the know“… if you claim you’ve had a few drinks to calm your nerves nobody can prove you were drunk at the time you killed someone.

RCMP Corporal Monty Robinson might be an asshole, but he’s not a stupid asshole.

He knew exactly what he was doing when he had those shots at home.  He then proceeded to refuse questions from investigators, which ultimately prompted charges of obstruction of justice, since they could not prove he was drunk when he killed 21-year-old Orion Hutchinson.

What’s most disgusting about this case, other than the fact that an RCMP Corporal killed someone and then lied about it, is that this piece of RCMP trash is still on the payroll.

Robinson has been on a paid vacation ever since killing Orion Hutchinson, a reward that utterly baffles me and flies in the face of common sense and decency.

RCMP Corporal Monty Robinson has been suspended with pay from the RCMP since Oct. 28, 2008.

Kill a couple of people, get a paid vacation.  The RCMP needs to change this asinine policy of keeping criminals on the payroll.

It’s not that the RCMP is unable to fire people like Robinson… they can.  It’s just that for reasons that make no sense to any rational Canadian, the RCMP refuses to do so.

The RCMP’s image, especially here in British Columbia, is very poor.  That image has been tarnished, perhaps irrevocably, by the actions of garbage like RCMP Corporal Monty Robinson, who clearly believe they are above the law and can do anything they want, up to and including killing people.

So far Robinson is 100% right about that.

He is above the law.

He’s never spent a day behind bars for his crimes.

He’s still on the RCMP payroll, for God’s sake!

Why shouldn’t he think he’s above the law?

No wonder the RCMP is such a disgrace.  They must stop hiding guys like Monty Robinson behind the Fat Blue Line.