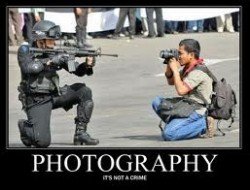 Stand on your own property, videotape police doing a traffic stop and get arrested.

As utterly bizarre as it sounds, that’s exactly what happened to Emily Good on the evening of May 12th, 2011.

Police had pulled over someone right in front of her home.  She stepped out onto her front lawn and began recording the police officers’ actions.

Saying “I don’t feel safe with you behind me“, a man identified as officer Mario Masic became more and more belligerent and finally hauled Emily away in handcuffs.

Emily Good was charged with “obstructing government administration“, whatever that means. What she did was not follow the unconstitutional order of a policeman. She did not obstruct anyone from doing anything.

She merely recorded them doing it.

That appears to be the crime though, doesn’t it? Police are more and more hostile to us regular citizens doing nothing more than record them as they do their jobs.

The most recent and horrific example was last week in Miami, where police, after shooting a man to death in a hail of gunfire from 9 policemen, turned those guns on anyone who happened to be nearby, seized cell phones and destroyed them in the hopes of ruining any video the innocent bystanders might have captured.

Thankfully they failed, and the video of their disgusting actions went worldwide in a matter of hours.

While Emily didn’t have a handgun stuck in her face, her Rights were violated just as egregiously.

“I’m looking forward to her lawsuit.“

Carlos is right. It should be a slam-dunk.

Others were not so polite in their comments on Carlos Miller’s story though.

“hornetman” writes “Another case of contempt of cop.”

“Tijuana Joe” said, “How flimsy did the first case have to be for them to drop it on a dime and go after the lady with the camera? ”

Duane Kerzic wrote, “She’s got a good lawsuit. Hope she has a good lawyer.
The officer needs a new job.”

“William” said, “Like I’ve always said, the cops are not here to help us. The fools think that they’re our overlords. ”

“fluid ambient” was probably the most outlandish though. “fluid” wrote, “How about if people start executing cops like this on the spot? Will that make this bullshit stop?”

Some commenters were very supportive of Emily’s upcoming lawsuit, and even provided some case law to get her started!

“I really hope she files a Section 1983 civil rights lawsuit against these officers. A great case to use to help find relevant citations would be Robinson v. Fetterman, et al.
www.paed.uscourts.gov/documents/opinions/05D0847P.pdf“

Can you imagine how this would have played out if she had a dog, and that dog was barking at officer Masic?

The dog would be dead, as would Emily, most likely, because the officer “feared for his safety” after giving someone an illegal and unconstitutional order.

It will be interesting to follow this case through the system to see if justice actually prevails.

What should happen is that “officer Mario Masic” needs to be sent for some “re-education” and forced reading of the United States Constitution. He should then be fired from his job since he’s obviously far too scared to be a cop.

Anyone this terrified of being watched by a citizen standing in her own front yard sure shouldn’t have a badge and a gun.