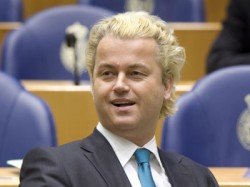 Dutch filmmaker Geert Wilders was cleared of charges of inciting hatred today in what I can only call a historic decision.  Had Wilders been found guilty, freedom of speech would have been dealt a lethal blow, and one it would likely not recover from, at least in The Netherlands.

Dutch Judge Marcel van Oosten ruled that Wilders’ speeches, writing and movie Fitna did not incite anyone to hatred, even though van Oosten called some of those comments “gross and denigrating.”

More importantly, of course, was the ruling that said Wilders’ public expression of his opinions were:

“acceptable within the context of public debate.”

Needless to say, Wilders was ecstatic with the decision.

“It’s not only an acquittal for me, but a victory for freedom of expression in the Netherlands.”

“Now the good news is that it’s also legal to be critical about Islam, to speak publicly in a critical way about Islam and this is something that we need because the Islamisation of our societies is a major problem and a threat to our freedom and I’m allowed to say so.”

Naturally, the foes of Free Speech were “deeply disappointed” with the decision, and like all good anti-freedom groups, were considering taking their case to another venue, perhaps the European Court of Human Rights or even the United Nations.

Haters of freedom are never sataisfied with an actual court ruling.  They much prefer rulings from so-called “Human Rights” tribunals and courts.  These farcical “courts” are much more likely to reward plaintifs for their “hurt feelings”, even though there is no such thing as a Human Right to UnHurt Feelings.

That hasn’t stopped Canada’s own quasi-judicial bodies from making large cash rewards to people who claim to have their feelings hurt, of course.  Most recently was the BC case that gave a lesbian plaintiff $22,500 for her “hurt feelings” while heckling a stand-up comic.

It’s absurd, of course, yet that’s what happens when we manufacture rights that don’t actually exist in the name of political correctness.

In Wilders’ case, for example, prosecutors said it was not interested in proceeding with charges against Wilders, but a politically-correct judge pushed the case into court anyway.

Freedom of Speech means the right to say unpopular things.  It is not “approved speech”.

Just because someone says something that I find offensive, that does not mean the statement or opinion is, for example, untrue. Wilders comes by his opinions honestly.  That he expresses them in ways that some find distasteful is irrelevant.  He has the right to express himself in the manner of his own choosing, not of our liking.

In an open and free society, everyone is entitled to freely express their opinions on matters of public and political interest.  If that opinion is not shared, it will die its own death.  We don’t need to kill it.

The Netherlands showed today that they are light-years ahead of countries like Canada, for example, where we stifle free speech with frightening regularity.

If we are to be a truly free society, then we need to get rid of all our so-called Human Rights Tribunals, Councils and Commissions.

They’ve ruled time and time again that “hurt feelings” outweigh our ACTUAL human rights, a notion that is patently absurd.

It’s time for Canada to follow the lead of The Netherlands and actually start protecting our Charter Rights and Freedoms and stop tossing them under the bus at every opportunity.