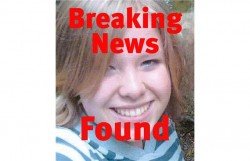 Last week I posted a notice forwarded to me by my pastor about a missing 16-year-old girl, Amanda McPhee.  Her parents and church family were understandably worried when she went missing, and many feared the worst.

Turns out Amanda had gone on a 6-day walk-about and didn’t think telling anyone was a good idea, wasting hundreds of police man-hours and causing considerable angst for family and friends.

The good news is that she is now home and safe, and for that we are most grateful.

From the Vancouver Sun newspaper:

METRO VANCOUVER — A Langley family is rejoicing as their 16-year-old daughter Amanda (Mandy) McPhee has come home after a week camping on Mount Seymour.

McPhee is now safe at home with family and friends after RCMP received a tip and picked her up at a Langley city bus loop this evening at 5:15 p.m.

“It’s unbelievable what she did, it was obviously terrible in many ways, but I’m just so glad she came back I’m not even concerned about that stuff,” said her father Mike over the phone.

Mandy is not talking to the media or her family just yet, but Mike said she is an avid fan of the outdoors and was not surprised she was able to survive almost a week in the wilderness unscathed.

“We’ve camped a lot, that’s why we were up at Alouette Lake looking for her,” her father said. “I never thought Mt. Seymour.”

Mike said she had enough money to get there and back on public transportation.

The family is currently celebrating in their home and wanted to thank the community effort to safely return the missing teen.

The Langley Christian School student vanished sometime Saturday night or Sunday morning, apparently walking out of the house in the 4200 block of 208th Street without her cell phone, without ID, and with just a little money.

Her family issued an emotional plea for help earlier this week to find their daughter, who was last seen by her mother in her bedroom at 11:30 p.m. Saturday.

Police said a search of her social networking accounts did not turn up anything suspicious, and there is no evidence to indicate McPhee was lured out of her home or kidnapped.

McPhee’s disappearance led to a groundswell of support from the community, which has scoured the neighbourhood all week after police called off the search for the missing girl at midnight Tuesday.