From the Langley Advance:

The search on the ground has been called off for missing Brookswood teenager Amanda “Mandy” Grace McPhee, but police and her parents are still hoping for tips and information from the public.

Mandy’s parents pleaded for the return of their missing daughter Tuesday afternoon, two days after she vanished from their Brookswood home.

The 16-year-old Langley Christian School student vanished sometime Saturday night or Sunday morning, apparently walking out of the house without her cellphone, without ID, and with just a little money.

He pleaded for anyone who saw a young, blonde woman around 208th Street and 42nd Avenue early Sunday morning, to phone the police. 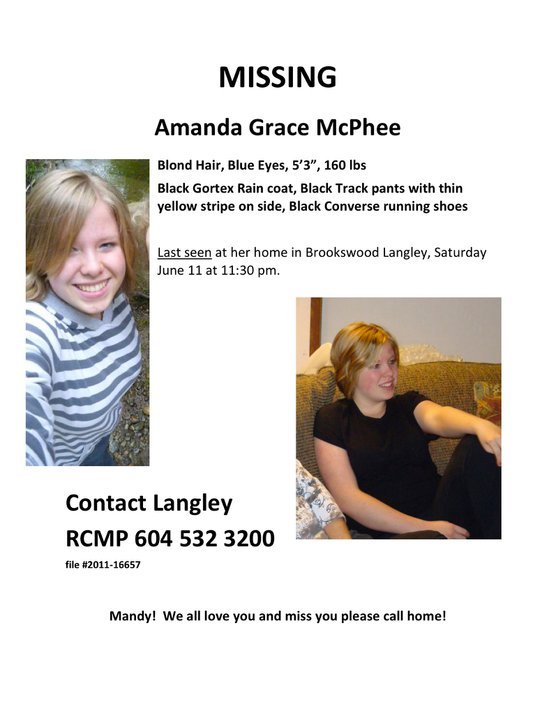 “It’s a really busy street, somebody saw her,” Mike said.

Neither her parents nor police have been able to come up with an explanation for why Mandy simply seems to have left her home and not returned.

Her mother Wendy saw the straight-A student go to bed at about 11:30 p.m. on Saturday night, said Cpl. Holly Marks, spokesperson for the Langley RCMP. The girl took her pet dog into her bedroom for the night.

A short time after that, McPhee sent a text message to a friend arranging to meet to study the next day.

When McPhee’s mother woke up the next morning, the dog was out of her daughter’s room. She waited, thinking her daughter was just sleeping in, but when she went to wake her, the room was empty. Her father was away golfing with friends in the Shuswap for the weekend, and McPhee is an only child, so no one else was in the home to pin down when she vanished.

There was no sign of foul play in the home. Presumably, McPhee left sometime in the night or early morning. She may have gone out for a quick run or walk.

McPhee does not have a history of running away. She was in the middle of high school exams, she did not argue with her parents before disappearing, and she had planned a trip to Mexico with a friend and two mothers for later this summer.

Her parents say she didn’t have a boyfriend, and none of her friends have seen or heard from her.

Ashley Bach, 16, became friends with McPhee when the two went to Langley Montessori school together. Bach said McPhee is a cheerful, polite, and hard-working student.

“She’s always happy, always nice to people,” Bach said. “Even if she doesn’t like someone, she’ll still be polite. She’s really smart. She has amazing grades – really high – and she worked really hard for them. At school, she’d never get into trouble. She would always have her homework done and she never fought with teachers.”

Marks said the RCMP have not found any evidence that Mandy was kidnapped from her home by force, nor have searches of her computer files turned up any indication that someone lured her via the Internet.

Her father urged her to get in touch with her family via phone, a computer, or text message.

“If you’re someone holding her, do the right thing, just let her go,” he said.

Teams of Search and Rescue volunteers arrived from as far away as Hope and the Sunshine Coast, said search manager Paul Crosby. However, by midnight Tuesday the search had been called off, having found nothing.

There are things the public can do to help, Crosby said.

“Check their own properties, particularly in the rural areas,” Crosby said.

“That really does help us.”

Volunteers came in from, among other places, Wendy’s workplace.

Scott Baker’s wife works with Wendy at an Aldergrove company. He and others joined the search on Tuesday, and said a number of her co-workers were taking time off work.

After the missing poster was released on Tuesday, volunteers drove around Langley putting it up well into the evening.

Police are using as many officers as they can spare for the investigation.

“The entire Serious Crime Unit is working on it,” said Marks.

Units like Street Crime and General Duty officers were pulled into the initial search, and regional units like the Canine Unit helped out. The Air 2 police helicopter was above Langley Monday and Tuesday nights, using its infrared cameras to try and find McPhee by body heat.

Some officers were apparently coming in on their days off to help as well.

The RCMP are still asking the public to help as much as possible by keeping an eye out for the missing girl, and to pass along any information they might have.

“We are just begging, begging for help,” Marks said.

“We do not know what happened to this girl.”

Anyone with information can call the Langley RCMP at 604-532-3200. Police are encouraging the public to use Facebook, Twitter, and email to spread information about McPhee.