For anyone not familiar with the horrific story of Jose Guerena, the former US Marine gunned down by the Pima County SWAT Team, here is a brief recap.

Jose Guerena is a a decorated US Marine.  He served two tours in Iraq and faced all kinds of dangers during both tours.  After leaving the Marine Corps he got a job at a local mine near Tucson to support his wife and young family.

Pima County SWAT raided his home for reasons that are still unclear.

They were making a forced entry into his home to search for drugs, they claim.  Why, nobody seems to be willing to say.   The warrant the SWAT team was operating with was sealed by a judge, and was finally released to the public on June 2nd, 2011.  It would seem a confidential informant gave police false and/or misleading information that was the basis for their botched drug raid. 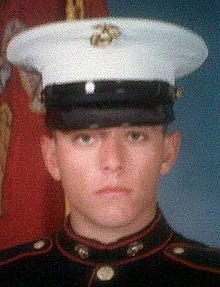 Jose Guerena, as I said, is a decorated Marine.  He’s well trained.  When his wife woke him up at 9:30am after he’d only just gotten to bed after his 12-hour shift at the ASARCO Mission mine, he was obviously tired.

But fearing for the safety of his family, he did what any trained Marine would do.  He grabbed his rifle and placed himself directly in Harms Way… between the perceived threat and his family.

It comes as no shock that the SWAT team claimed Jose fired first and that their killing of him was justified.  Unfortunately, and as happens far too often in cases like this, the SWAT version doesn’t hold up.  They lied.  Jose did NOT fire first.  The safety of Jose’s firearm was ON after he was killed.

That forced them to reveal that one of the SWAT team negligently discharged his weapon, leading other members to open fire in the mistake belief that Jose Guerena had fired on them.

In what has become disgusting normal practice, the police refused to allow paramedics to attend to Jose until they could “secure the area”, whatever that means.  They’d already murdered the only man outside of themselves with a firearm.  Jose was still alive after the shooting.  His wife begged police to get him to the hospital, but it was 1 hour and 14 minutes later that they finally allowed paramedics inside.  In that time Jose Guerena had died, alone… murdered in his own home.

Pima County Police were quick to issue press releases stating that Guerena owned numerous items that are perfectly legal for any US citizen to own, such as firearms and baseball caps… anything at all they could say that would tarnish Guerena’s name and help cover their asses.

I hope and pray that Jose’s wife sues the Pima County SWAT and Pima County Police for the loss of her husband, and that when she does, a judge with some common sense finds their actions in violation of the United States Constitution.

If I sound outraged, it’s only because I am.

SWAT Teams across North America have become the defacto search warrant servers, leading to the untimely and unnecessary deaths of countless people in these cases.

Police forces, once the friend of the average citizen, now seem intent on terrorizing us into submission.    It’s disgusting.

Below is a video of Oath Keepers holding a memorial service for Jose Guerena and all of the fallen armed forces men and women on Memorial Day, 2011.

It opens with a long procession leading to the memorial service, where Oath Keepers explain what they are doing and why, along with various members of the forces, both active and retired, reading the Declaration of Independence and the Amendments to the United States Constitution.

The murder of Jose Guerena is a stark reminder of what happens when militarized police forces are willing to break down anyone’s door they want without actually doing any investigation to see if the information some paid informant has given them is even valid.

But apparently that is inconsequential to America’s militarized police forces who are far too willing to shoot first and ask questions later.

I hope and pray that Jose Guerena is the last US Marine murdered on American soil by American police acting on wrong information.

That is the recap (and my rant) that will lead you to what you’re about to see in this half-hour video.

Jose Guerena, Rest In Peace, and God please take care of this widow and her young family in the days, weeks and years to come, and keep them safe.

“Note to Viewer: Be advised that this is a very emotionally difficult video to watch as it is a memorial service for a fallen Marine with his widow and other family and to remember our war dead. This should not be viewed lightly, but it goes to the heart of what it means to be an American and how high the stakes are for all of us in the struggle for our liberty.

“Those of us who were there on Memorial Day walked away knowing that it was the right thing to do – and let the chips fall where they may.” – Stewart Rhodes

Hundreds gathered in Tucson Arizona to Honor 2-Tour U.S.M.C. Veteran, Jose Guerena as well as all our War Dead.

Vanessa Guerena and her family.

Reading the Declaration of Independence:

Reading of the Bill of Rights

A huge thank you to John Oetken, Alicia Lutz-Rolow, Jeff Ford, Greg Baker, George Pulsifer, Nancy Learned, Steve Simpson and his wife, who were part of the California contingency that traveled to Tucson to be present for the March and Memorial Service… Thanks for representing!