That’s what happened in California the other day. 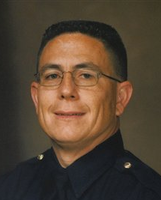 In this case it seems there was a slight mis-communication, and the two motorcycle cops collided, Officer Garton was thrown into traffic where he was immediately hit head-on by an oncoming sedan.

William Loveless, a retired CHP motorcycle officer and a director of the Municipal Motorcycle Officers of California, said outriders will routinely accelerate to beyond the speed limit so they can get from one off-ramp or side street to the next, while the procession itself moves slower than the speed limit.

Police officers die far too often at the hands of violent and dangerous criminals.  We expect that.  It’s part of the job, and one that every man and woman who wears a badge comes to terms with.

What makes Garton’s death so terrible, at least in my eyes, is that he was trying to make the procession safe for another officer’s grieving family when he was killed.

It somehow compounds the tragedy.

Andrew Garton, a seven year veteran with the Hawthorne Police Department, is survived by his wife and two sons, 12 and 7.

Please pray for Garton’s wife and sons as they come to grips with the death of their husband and father in such a tragic and untimely way.